Exhibitions by Matisse, Goedel, and Kentridge.

A few months after I put up a map of the world with the loose intention of inspiring more travel, M surprised me with a short, spontaneous trip to Amsterdam for two of our favorite things—riding bicycles and seeing art and design. Here are my highlights.

The Oasis of Matisse at the Stedelijk Museum

As a young art student I was deeply inspired by Matisse’s paper cutout collage. I loved how they were joyful and expressive, and full of movement and freedom. I missed them when they were at the MoMA, but it is just as well as the Stedelijk wasn’t very crowded last Friday afternoon.

There are two segments of the show. Downstairs, smaller galleries identify Matisse’s stages of development, often correlated to periods of travel, and show works alongside others by Matisse’s contemporaries. It was like a who’s who of early 20th century art, with Fauvists, German Expressionists, Supremetists, and more. I thought a lot about luck and privilege—the happenstances and conditions that contributed to Matisse’s development—being born in a certain country and period, of a particular race and gender, with the means to travel and devote oneself entirely to studying and making art, within a milieu of likewise-enabled artists, interested patrons, and a tolerant government. I thought about how these probably shaped Matisse’s psyche, and his confidence and ambition—the aspects of his art that are most striking. The exhibition leads up to Matisse’s late-in-life cutouts. It seemed that every stage was a step towards this fullest expression of the master artist. I couldn’t help but feel a pang of jealousy, of all the time he was able to devote to his own artistic development.

Upstairs, a large gallery displays Matisse’s cutouts, often using his signature fig leaf motif. I loved the color palette: rich, vibrant ultramarine, an even more vibrant magenta, black, red, yellow. These high-key colors underscore the graphic sensibility, yet the papers are hand-painted and improvised—you can see where the cutouts were cut and moved around again. Some of the collages are massive. You could spend a long time in this gallery, noticing how one’s eye moves around the musical compositions.

While I was familiar with many of Matisse’s works, including his design for a stained glass window (above, left), I was surprised to see a number of ceremonial capes. These were lovely translations of Matisse’s free, expressive cutouts in satin appliqués. The palettes, designs, and relation to the body were satisfyingly unified wholes.

Finally, another large gallery is devoted to Jazz, Matisse’s book of cutouts and handwritten pages. While I admired how the cutouts were slightly textured as prints (and appreciated the validation that handwritten pages could make an interesting exhibition), I was interested to read that Matisse was disappointed in the result—he found the prints lifeless, and the experience helped him realize that the cutouts could work as artworks in their own rights. Even “master” artists have to take risks and fail (even if such works are not perceived by others as failures). It underscored the sense that one could use a whole lifetime to fully realize one’s potential as an artist.

Noémie Goudal: The Geometrical Determination of the Sunrise at FOAM

This show—with a series of large photographs, a photo-installation, stereoscopic images, and two short videos—was a stunning introduction for me to this young French artist’s work. She’s concerned with architecture that is related to the sun, and fabricates what look like xerographic constructions that she shoots as immaculate black and white analog photographs. They’re quiet and wonderfully strange.

There’s also an anamorphic installation of pieces of plate glass with cutout photographic imagery of an interior space. There are stereoscopic images of natural landscapes, like snowy peaks shrouded in clouds.

The exhibition is really rounded out by two short videos. Both are single, continuous shots from afar of a large architectural structure, wherein identically costumed humans commence and end a repetitive task. In the first, workers in white bunny suits descend ladders inside a massive, dark factory space, coming from a skylight and dropping beneath the floor. In the second, divers climb up and dive from a diving tower in a river foregrounding a distant mountain. There’s only about a half-dozen of them, and they cycle on for minutes, becoming more tired, and finally stopping. The videos function like moving image photographs of an architectural space, or like little scenes about an unidentified place. There is a sense of myth, detached from any specific time and place.

The Goudal show is excellently paired with Katy Grannan’s The Nine and The Ninety-Nine, portraits and scenes from a video-in-progress of the down-and-out in and around Modesto, CA. 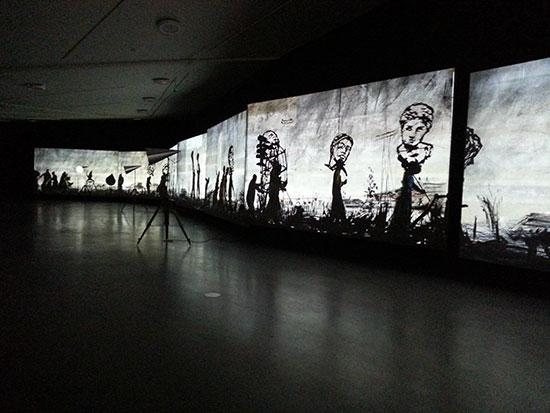 William Kentridge: If We Ever Get to Heaven at the Eye Film Institute

There are three works in this knockout show: a 2008 single-channel stop-motion animation, a 2011 video installation with multiple channels, More Sweetly Play the Dance, a new commission especially for the Eye that is a 45-meter-long, multi-channel, synced panorama. The first two contextualize how Kentridge arrived at the third.

The video is a blend of Kentridge’s characteristic charcoal animation forming the background (I liked the restrained use of his signature style), a few puppets, and many live actors carrying props made by Kentridge. (The props are on view in an adjacent gallery, and are totally scrappy. A few are installed with the back towards viewers, to show their fabrication of corrugated cardboard, ink, hot glue, and bits of wood for reinforcement and handles.) 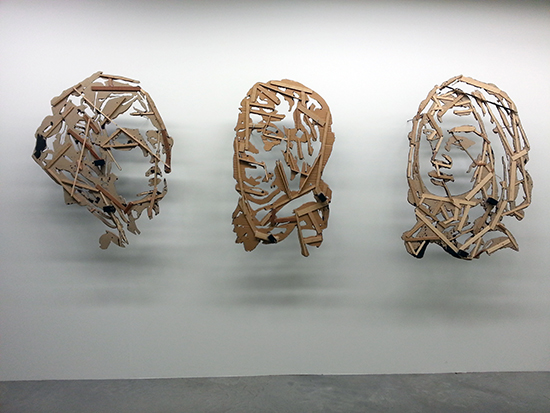 William Kentridge, If We Ever Get to Heaven, installation view at Eye Film Institute 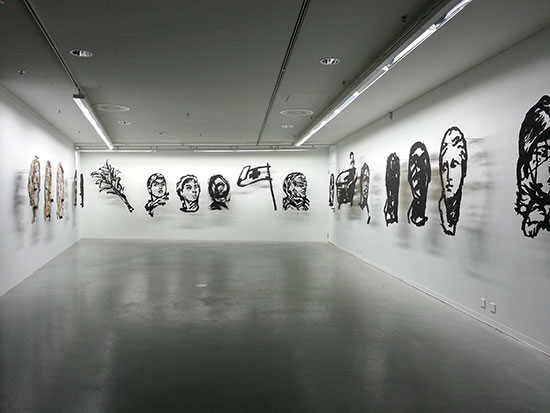 William Kentridge, If We Ever Get to Heaven, installation view at Eye Film Institute

The actors form a parade, which starts out with a brass band in ornate dress and dancers. The tone is joyful. I appreciated the combination of expressive looseness and high-production value. The staging of the filming must have been a massive undertaking, yet the props are simple, roughshod cardboard elements. The score, audio recording, and audio playback are very well done, yet the projections do not match up edge-to-edge, echoing the collage-like feeling of Kentridge’s animations.

As the film continues, however, the parade morphs into a darker, mournful procession. The sick push IVs, goaded along by others wearing head to toe plastic protection gear. There are gravediggers carrying shovels. One might think of Kentridge’s work in the context of the fallout of apartheid—something of the past, of a specific nation (though there’s a different resonance in the Netherlands, as South Africa was colonized by the Dutch)—but there are larger narratives, having to do with Ebola throughout Africa, that implicate all of us. More Sweetly Play the Dance is a powerful example of Kentridge’s ability to blend the specific, the poetic, and the topical.

In the exhibition essay, Kentridge is quoted as saying:

Every act of enlightenment, all the missions to save souls, all the best impulses, are so dogged by the weight of what follows them; their shadow, the violence that has accompanied enlightenment.

While I’m not totally comfortable with the futility and pessimism in the statement, it made me think about the Truth and Reconciliation process in South Africa, in contrast with the persistent institutional racism and denial of privilege going on in the US now.

We also went to De Appel Arts Centre, the Stedelijk Museum Bureau Amsterdam (project space) and the Huis Marseille Museum of Photography. Cool spaces, but I personally didn’t connect with the current exhibitions.

Privilege the viewing experience. While I had aspirations to visit the Van Gogh Museum, I just couldn’t bring myself to deal with the long lines and crowds. I’m not interested in elbowing my way into a clear sightline around a famous, expensive painting as other tourists snap photos. It’s too stressful and unpleasant. It’s not a good way to experience a work of art, and I am glad that I know myself well enough not to visit out of a sense of duty only.

I did have the odd feeling of recognizing works from art history books at the Matisse show. The reproduction does detract from the aura of the original, but more so does hype.

Safety first, and all that follows. I really like riding a bicycle but I rarely do. There are too many reasons not to—fear of being hit by a car, truck, or bus; concerns about personal safety after nightfall; poor bike lanes; not enough bike parking; bike theft; and aggressively car-centric attitudes in general. When you eliminate or minimize such reasons, it’s liberating. I enjoyed the integration and espousal of bike culture in Amsterdam during my short stay, and wonder how living in such a bike-friendly place impacts your lifestyle and psyche over the long term. We saw thousands of bicyclists everyday, including parents toting one or more children, and very few private cars on the road. Bike lanes were protected and clearly marked. When lanes are shared, drivers were almost always patient and respectful. A tram stopped to let us cross the street. That feeling of safety is maybe one of the most foreign and novel things I experienced—such a contrast from the outright aggression that cyclists face and have to psychologically armor themselves against when riding in NYC.

This pretty much sums it up. Life’s too short to hate your commute.