Tomorrow! 🎈Color Factory opens in Chicago! 🤩Very happy an iteration of my installation with @leahmartharosenberg and @theindigobunting is being adapted for this new location! Check it out and send pics please. Wish I was there. ❤️
One year ago we launched my largest public art project to date. How I Keep Looking Up shared 11 senior New Yorkers’ sources of resilience via flag designs, custom flag poles, and signage in English, Spanish, Chinese and Braille (English). It was exhibited in Times Square for 8 weeks. Times Square as a neighborhood had about 3M (yes, million🤯) visitors during that period. It was free and open for anyone to see, 24/7. I hope for some seniors, stitchers, visitors from around the world, and everyday New Yorkers, this work was part of a nice memory that they’ll carry with them.
I was literally stopped 👀in my tracks the first time I encountered the “We Belong Here” artworks by Amanda Phingbodhipakkiya (@alonglastname). I feel an artistic sympatico 💞with her bc of her interest in belonging and APA healing in a time of APA hate. 💛💛💛

Despite only mild curiosity about medical history and an easily grossed-out constitution, I was consistently enthralled at yesterday’s Festival of Medical History at the New York Academy of Medicine (NYAM).

The festival’s organizers—which included art writer Lawrence Weschler—suffused the conference with programming that could have easily been presented at visual criticism symposia. Though it’s ostensibly a science-oriented festival, I loved the integration of aesthetics. Here are my highlights:

Filmmaker/editor Michael Benson jocularly presented photos of the universe (see some here, click on ‘Prints’), which neuroscientist Carl Schoonover tried to match or top with images of the brain (see some here, click on ‘Portraits of the Mind’). Both speakers offered insightful factoids emphasizing immensity—either the space’s grandness or the brain’s complexity. It was entertaining, playful, visually stunning, and expansive.

The compositions where surprisingly similar, yet aesthetically divergent. The images of the cosmos exuded high resolution and definition, while the images of the brain were either painterly or graphic, with subjective use of color. It raised questions about the selectivity of image-processing. What drives the desire to bring distant galaxies into crystal clear focus? What does it mean when color is cleaved from visual reality, making some gases visible to the human eye, or differentiating microscopic parts of the brain in fantastical neon colors?

Both speakers limned the question of what constitutes consciousness. Benson’s images could be tools in the search for extra-terrestrial life, while Schoonover showed a video of active brain cells in a Petri dish, reaching out to build connections.

(Bonus: Check out the transcendent Cat’s Eye Nebula on the Hubble site.)

Spaces to Read, Research and Work

NYAM’s building on Fifth Ave is grand, with lots of beautiful, symbolic architectural features. We visited its rare books library (open to the public by appointment), which housed a display of Renaissance-era books with fantastic wood engravings and etchings, and 19th- and 20th-century ephemera—always a typographic treat.

Conservation lab at the New York Academy of Medicine.

The conservation lab, however, was exactly my kind of dreamy: a spacious, light-filled, dust-free, and organized workspace. Everything had its place, from fabric yardage in a gridded shelving system, to boards in flat racks, to a few real-bone folders on display. The workbenches—laminate tops, ergonomic heights, on casters—made me miss the clean room in the old CCA Printshop, and fantasize about a dream studio with an enclosed clean/storage room.

A drill press was fitted into a corner next both a hand vacuum and a dust-collection machine: a Virgo’s paradise.

(Side note: The three conservators were female; one mentioned how traditionally, women sewed bindings. In my experience, contemporary book binding and book arts seem practiced by women more often than men. Why is that? The fact that sewing is involved can’t be determinate, even today, can it? Or is there something about temperament, and the quietude of books? Or both?)

Amy Herzog‘s talk about dioramas was fantastic. I hope she publishes an essay, it was one of the most well-crafted visual criticism presentations I’ve heard, connecting the reflection of the self in daguerreotypes, Daguerre’s coining of the term diorama, and the recognition of self through encounters with the other and a confrontation with death. Here’s the synopsis:

Momento Mori: Reflections on Death and the Art of the Tableau

This talk surveys a spectrum of artistic and museological dioramas, waxworks, and post-mortem photographic practices, and the hermetic, frozen worlds each offer to the viewer. There is something profoundly fetishistic, and mildly necrophilic, at the heart of the diorama, an apparent desire to encapsulate and reanimate those items on display. This paradoxical tension between preservation and regeneration seems germane to the 19th-century imaginary in general, the moment at which many of the visual practices I will discuss came into being. And while the diorama in particular is driven by a certain pedagogical directive, my talk will suggest that their lessons are more ambiguous than their creators likely imagined, and offer uncanny insights into our contemporary condition.

(Weird bonus! Learn about a book of Walter Potter’s bizarre anthropomorphized kitten taxidermy or see pics on The Daily Mail.)

As employee of the US National Library of Medicine, and therefore, the federal government, Michael Sappol‘s talk was at risk of cancelation. In a brilliant sidestep of the government shutdown, someone else read Sappol’s written remarks.

Sappol wrote that rays, beams, and waves became an obsession and a base metaphor of modernity in the 1920s-1940s. Kahn was a physician who lived from 1888-1968 (what a spectacular period in which to live!). Using commercial illustrators, he used pipes and rooms to create body-as-factory illustrations, and then adopted lines to signal electricity within and outside of the body, like flow charts a with spare diagrammatic language for engineers.

I love Sappol’s ideas of developing an iconography of “occult forces” invisible to the human eye; of “electricity, magnetism, mesmerism;” connecting light and radios and radiology for images of “radiant modernity;” and the merging of German mechanist tradition with Kahn’s Romantic leanings. Indeed, some of the radiant images reminded me of Charles Burchfield’s visionary paintings, like Radiant Spring. 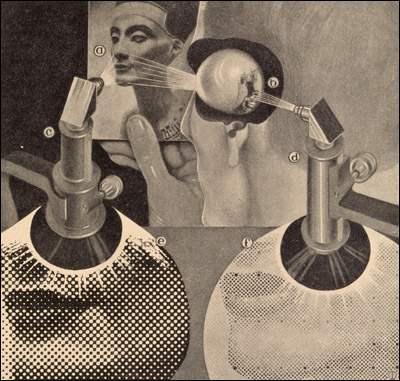 Kahn’s pictures are immediately appealing, and Sappol explains why: they harmonize the discordant in modern life via the flow of life and energy.

Learn more about Kahn and his work at Fritz-Kahn.com.

Or set yourself a Google alert for Sappol’s book (currently in production), How to Get Modern with Scientific Illustration: Fritz Kahn, Pictured Knowledge and the Visual Rhetoric of Modernity.

Get excited: NYAM plans to make the festival an inaugural event. I hope they keep it free, open to the public, and strongly integrated with art and aesthetics!

Thanks for bringing the festival to my attention, M and New York Today, NYT’s fantastic picks list (also a great reference for ultra-concise yet warm writing, to which I will aspire, however wordily I fail).