Sugoi!!! Japan art trip, part 2. The serene natural beauty of Karuizawa, a mountain resort town outside of Tokyo, did something to my brain, where I felt like aesthetic experiences were not few and far between, but frequent and just below the surface.
Japan 🇯🇵 art trip, part 1. Continuing as a Mindscapes AIR, I traveled from India to Tokyo to #Karuizawa, a resort town 🌲 in the mountains 🗻 of Nagoya. Over a week, I worked with about 40 community members in 5 workshops organized by Hocchi No Lodge ほっちのロッヂ, a clinic with an artist residency program.

Note: WSW typically awards 5-9 Studio Workspace Residencies, depending on how events impact the maximum number of artists that they can accommodate in the studio.

Lighthouse Works’ fellowship program received over 500 applications for 15 fellowships awarded for the upcoming Spring and Summer.

Selected artists comprise less than 1:33, or 3% of applicants.

*Two residents were invited, for a total of seven residents in 2017.

A few notes on my residency in June and July, with personal reflections. A continuation of “Kala Fellowship: Residency Notes, Part 1.”

I returned to Kala from early June to late July for a second residency stint. Over those six weeks, I developed new work—including collaborations with Leah Rosenberg, Elizabeth Travelslight, and Sarrita Hunn (Institute for Autonomous Practices)—and installed it in the Kala Fellows’ exhibition (currently on view through October 15). [Update: I’ve posted photos on my website.]

Screenprints in the drying rack for a game developed in collaboration with Sarrita Hunn (Institute for Autonomous Practice). The top layers are cards, including some inspired by questions in my recent zine on interdependence. The bottom layers are canvas game “boards.”

Press lock-up on the delightfully light Vandercook SP-15. For Friendship Field Trip, a collaboration with Elizabeth Travelslight. It comes in four pieces, each describing an activity to deepen a friendship. The back of all four assembles into a map/poster.

This experience was extraordinarily positive, like my January/February stint. Here are a few updates:

Busier printshop. There were more AIRs and Fellows in town for the summer season. The chill, atelier-like vibe often gave way to a bustling hive of printing. The screen printing equipment was especially popular.

Fellows and staff took a break for lunch.

New Fellows Ronny Quevedo (Bronx, NY) and James Voller (New Zealand/Melbourne), Honorary Fellows Katie Baldwin and Chris Thorson, and AIRs Aaron Hughes and Mikey Kelly arrived or continued their visits, and I enjoyed getting to know them and work alongside them.

Kala is a special place, run by extraordinarily dedicated people. For example, I needed to borrow a table from Southern Exposure (thanks SoEx and Val!), and Art Sales Manager Andrea Voinot picked it up on her day off. I feel indebted to Kala and the people whose labor, energy and generosity make it work.

Deadlines. My prior stint involved experimenting to learn techniques. But for this visit, I had to focus on finishing work for the show. The numerous steps involved in my project—preparing the art, printing, binding, sewing, installation—quickly became an unyielding reality I had to cope with.

I think I could have scheduled my production a bit more strategically, especially when it came to collaborations. I felt like I was running out of time. As an art handler, I felt that my work should have been done ahead of the installation period. But as an artist, I realized that this is all new work—quite a bit of it, with an involved installation, and it’s not the same thing as installing existing works.

Thankfully, I received assistance with perforation, lighting, and photography from interns Katrina and Sean, and sewing assistance from my mom, Sophia Wong.

Mom proudly sports the apron she just finished sewing in the artist’s project space at Kala. 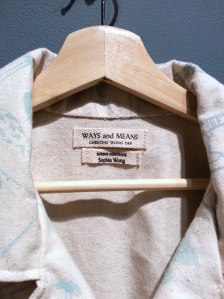 Detail of a lab coat sewn by Mom.

Work/life balance. As with other residencies, I got really invested in productivity. I was often at the printshop by 7am—partly to beat the bridge traffic, and partly to get things done (aided by starting out on East Coast time). I made the most of my time at Kala, but I can’t say the same about the Bay Area… 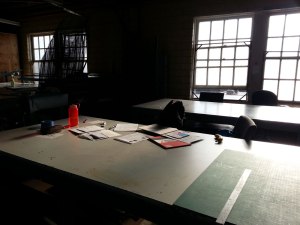 Early mornings in the printshop.

I could have been more present for family and friends, been a more patient and kind collaborator, seen more art (especially the new SFMOMA, Ed Ruscha show at the DeYoung, Torreya Cummings’ installation at the Oakland Museum, Postscripts to Revolution at Southern Exposure, and Bizarre Bazaar at Root Division) and spared myself some of the 12-(up to 15.5-)hour days. It’s paradoxical to sacrifice relationships to make art about interdependence. But I’m not sure what I could have changed, if I had the chance to do it again. There’s only so many hours in the day, and it was already a privilege (as well as financial and marital stretches) to be away so long.

Interdependent, communal spaces. At Kala, I thought about Elizabeth Travelslight‘s description of being a co-op member in CO-LABORATION:

It becomes quite habitual—you get in the habit of seeing people fully and being seen fully.

That was how I felt at Kala. The collective ethos there can be enlivened with little effort, mainly greeting people, communicating openly, and generally having faith in others. I had to adopt these attitudes and behaviors (it felt almost Midwestern…). I felt welcomed and very much like a thread in the social fabric. Colleagues were encouraging, helpful, and friendly. Even with my middling technique, I was accepted… It was validating.

With the help of LR, I realized that these are the same feelings I felt at gyms Pacific Ring Sports and Fight and Fitness this summer, and are the same motivations for training amongst others. I hadn’t realized the connection until LR visited PRS and pointed out how members can similarly cultivate a spirit of mutual respect and encouragement. That validation grew my sense of value within these communities, which can become like chosen families. To be encouraged to keep training, and to come back anytime by people who’d easily submitted me, or who I’d accidentally headbutted, melts my heart. It’s about sportsmanship, but moreover, shared experiences of hard work and growth. These gyms and Kala provided opportunities to be humbled, to develop new skills and new friends, to be accepted, and to be grateful. I felt my sense of value and integrity being grounded by being seen and seeing others, and gained lived experiences of ordering aspects of life interdependently.]

The head coaches at Pacific Ring and Fight and Fitness were all from Fairtex, whose SF gym has since dissolved. I started out there too, about 15 years ago. After a hiatus following my move to NYC, I’m revitalizing my appreciation for the development and relationships gained through this type of training. The Bay Area has an embarrassment of riches when it comes to quality muay thai and BJJ training; I recommend residents avail themselves to it.