I’m pretty excited about these two openings coming up this week. The first features some really fun and funny photos, and the second is curated by a friend and hardworking curator from CCA.

Everyday UFOs, an exhibition of recent photography by artist Gregg Louis will be on view in the project room at the Nohra Haime Gallery from March 16th through April 23rd.

In his first solo exhibition in New York, Louis uses photography to construct uncanny images of UFOs out of found household objects such as light bulbs, TV antennas, dishes, plungers, ect. His process of arranging, stacking, and transposing these mundane objects against a black backdrop creates surreal images that humorously and sometimes eerily re-imagine everyday reality. By transforming these ubiquitous objects that typically fade into the background of our daily lives, Louis creates playful images that at once feel unique, familiar, and otherworldly.

Everyday UFOs mediates between an optimistic child-like playfulness and a skeptical investigation into projections and blind faith in phenomena beyond the earthly realm. The work blurs the line between belief, imagination and reality, and explores the potential we have to knowingly or unknowingly redefine our everyday perceptions for better or worse.

Gregg Louis, a multidisciplinary artist, was born in St. Louis, Missouri. He moved to New York and received his Master of Fine Arts from School of Visual Arts in 2009. Louis was a participant in the Skowhegan School of Painting and Sculpture Residency Program in 2009. His work has been exhibited in both the US and abroad. Louis currently lives and works in Brooklyn, New York.

The genre of comedy, in all its various manifestations in stand-up, theater, literature, television, and movies has long provided rich and valuable inspiration for artists seeking to critique contemporary society using parody, satire and dark humor. Inspired by the parallel ability of both the stand-up comedian and the artist to play the role of cultural observer and provacateur, this exhibition presents new sculpture, video, installations, and photography by artists, who strategically examine, with their frank observations and dry wit, the socio-political dimensions of power associated with cultural, racial, and economic issues. Titled after the longer idiom “tell the truth and shame the devil,” which means to speak honestly and without censor, these artists, following the long traditions of political caricature, offer up wry send-ups of political commentary on such critical issues as global poverty, racial profiling, anti-terrorist paranoia, and right-wing extremism. Artists include: Jabari Anderson, Elizabeth Axtman, Michael Britto, Wayne Hodge, My Barbarian, Huong Ngo, Jessica Ann Peavy, Sara Greenberger Rafferty, Jimmy Joe Roche, and Kenya (Robinson).

Leeson, of course, is a significant figure from early Feminist Art, has been in and around San Francisco for decades, and has continued to make new work in new media. I really loved her museum show at the Whitworth Gallery in Manchester, which showed off her facilities in multiple media. At Anglim, she’s showing mostly large, impressive photographs of a female mannequin with a look of surprise; the mannequin has also been placed behind a digital projection of Manet’s Olympia, and there’s also a wholly digital, multivalent media presenting another female avatar. The odd, cold distance between viewer and subject (mannequin, avatar) is an important part of the work, so there’s lots of “meta-” to mull over. 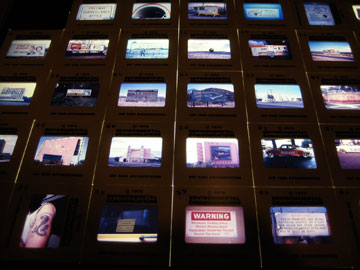 Detail from drawing/print on vellum by Ant Farm (Gallery Paule Anglim). Text: As if to steer the future.

In the small room, Ant Farm presents fantastic dreams of a media van via architectural prints/drawings on vellum, with some supplementary media (such as digital photo collages and a completely conceptually honest lightbox displaying slides from 1977-78, when Ant Farm initiated their first van project). Of course, the van itself will be on view at SFMOMA (whose site has finally undergone a cleaner, crisper re-design) in The Art of Participation exhibition, which opens Nov. 8. It’s great to see how these art elements take form in the public sphere after seeing the van in production for months at the building next door to my studio. 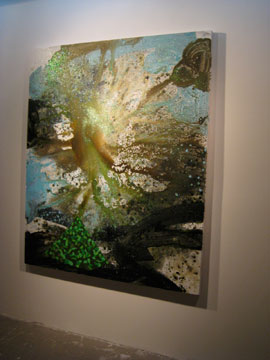 Another nice pairing of good art!

I never met David Huffman, though our stints at CCA overlapped quite a bit: me undergrad, Huffman grad; me grad, Huffman professor. So I’ve seen his work a bunch. His ‘bots continue to evolve, and his paintings are staying a few astral steps ahead of those of many Bay Area painters. In this exhibition, washes of paint and glitter verge on sublime, still, they’re paired with tightly rendered, pointedly racial people, places and things, such as the pyramid of watermelons in the picture above. In lieu of a firsthand account of the artist himself, I offer in congratulatory spirit this favorable account of the painting professor’s words: “You’re a painter! You have to be a vampire of paint!” For sure! The teacher shows an insatiable drive to forge ahead…

Jefferson Pinder covers his photogenic face in shaving cream — a whitening-out reversal of Zhang Huan’s self-drenching in ink — in a series of self-portraits with butoh-like results. In fact, an Asian stringed instrument accompanies the riveting video of still images of the whitened-out artist behind a projection of a rocket launch. The juxtapositions are quite tense, and result in some brilliant images captured in additional photographs. It’s an interesting bridge between video, photography and performance, with much in kinship with experimental theater that incorporates video, like the work of Sarah Kraft and David Szlasa.

Awe-inspiring. Muniz makes pictures out of food, garbage, and now, puzzles and cut paper. The sheer feats of craftsmanship are engaging, and the photos perfectly executed. The prints have an uncanny depth. As Gilson pointed out, it’s a common art school assignment to make a collage from gray paper or found objects. But Muniz proves that you don’t have to be the first one to do an idea, you just have to do it best. I’m starting to wonder what can’t he do?

There were also some nice pictures by Richard Avedon at Frankel Gallery, rare perfections from Life Before Photoshop. The Dustin Fosnot show at Steven Wolf Fine Arts was poetic, edited, and personal — in contrast with his last, which was quirky-quirky-quirky. I find pathetic art appealing. Ironic, distanced pathos is common and easy, but the new Fosnot pathos is restrained, uncomfortably intimate.

I missed two shows that are probably good — Diem Chau at Mark Wolfe Contemporary and Tiffany Bostwick at Gregory Lind — but I was already crossing Market and going back in time to 111 Minna, which manages to be forever young. At their group show of figurative painters and draw-ers concerned with fauna, I saw old friends with new beards. So goes 2008.