✨✨✨ things are happening ✨✨✨ #Repost @shannonraestratton • • • • • • John Michael Kohler Arts Center #betweenyouandme opens April 18th @jmkac! Stay tuned: this epic show features artists whose work intersects with the ways artists care for community through empathy, dialog, hospitality, nurturing, mentorship and correspondence. So many ✨: @publicinvestigator @christinewongyap @saraclugage @johnpreus @benjamintoddwills @brookstakahashi @danamindlbr @generalsisters @lisanicolejarrett @harrell_fletcher @ksmoca Postcard c/o #christinewongyap 🗨️
Various acts of appearing and disappearing, and seeing anew... Some works at the @corningmuseum. .. 1. František Vízner .. 2. Larry Bell. Also, how perfect is this architecture!?! .. 3.  Fred Wilson. Black-painted clear glass. .. 4, 5. Vàclav Cigler .. 6. Olafur Elliasson. This one is just a light and a piece of optical glass that's shaped sort of like a thin circular band. .. #studioglass #minimalism
Friends! I’m launching a new project 🎀 on Art, Culture and #Belonging in #SanFranciscoChinatown. Whether you live or work in Chinatown or visit (like me), you’re invited to share your story of belonging. How does art and culture contribute to belonging? We’re open to all forms of art and culture, BTW. 🍜🍣🥟🍝🍻📱🌈🎭🎨🎬🎤🎮🏎🖼 Tell us, what makes Chinatown special to YOU? .. To share your story or learn more, visit belongingsfc.christinewongyap.com, which is also accessible via my website — link in bio (@christinewongyap). .. Your contributions will inform a publication and artworks I’ll create for an exhibition in Fall 2020 in SF Chinatown. .. This project is a collaboration with the Chinatown Arts & Culture Coalition and @cccsanfrancisco. It is supported by @sanfranciscofoundation. Thank you for considering, sharing your story, and spreading the word! 🙏

I’m pretty excited about these two openings coming up this week. The first features some really fun and funny photos, and the second is curated by a friend and hardworking curator from CCA. 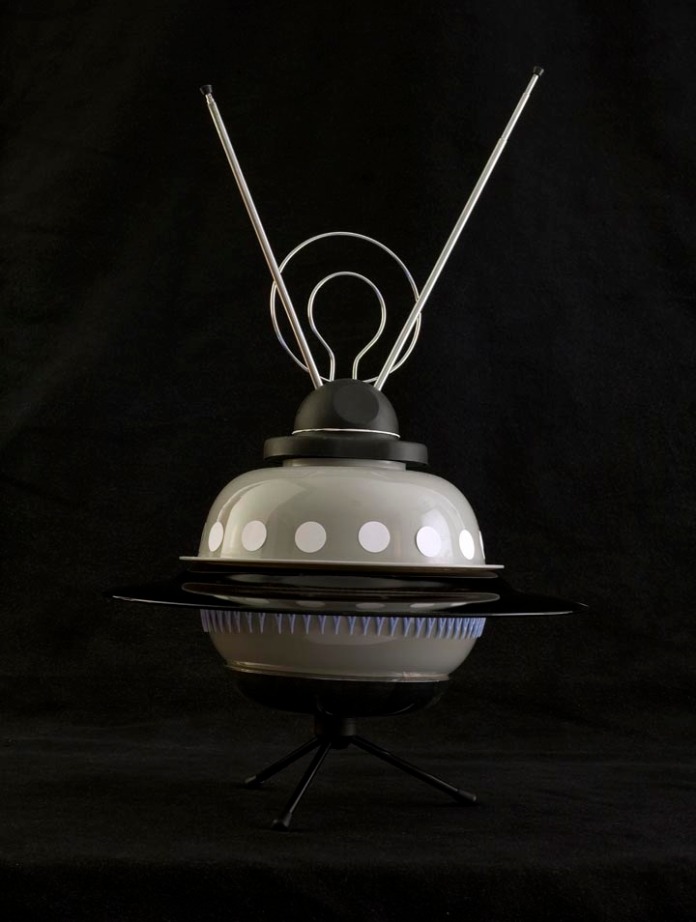 Everyday UFOs, an exhibition of recent photography by artist Gregg Louis will be on view in the project room at the Nohra Haime Gallery from March 16th through April 23rd.

In his first solo exhibition in New York, Louis uses photography to construct uncanny images of UFOs out of found household objects such as light bulbs, TV antennas, dishes, plungers, ect. His process of arranging, stacking, and transposing these mundane objects against a black backdrop creates surreal images that humorously and sometimes eerily re-imagine everyday reality. By transforming these ubiquitous objects that typically fade into the background of our daily lives, Louis creates playful images that at once feel unique, familiar, and otherworldly.

Everyday UFOs mediates between an optimistic child-like playfulness and a skeptical investigation into projections and blind faith in phenomena beyond the earthly realm. The work blurs the line between belief, imagination and reality, and explores the potential we have to knowingly or unknowingly redefine our everyday perceptions for better or worse.

Gregg Louis, a multidisciplinary artist, was born in St. Louis, Missouri. He moved to New York and received his Master of Fine Arts from School of Visual Arts in 2009. Louis was a participant in the Skowhegan School of Painting and Sculpture Residency Program in 2009. His work has been exhibited in both the US and abroad. Louis currently lives and works in Brooklyn, New York.

The genre of comedy, in all its various manifestations in stand-up, theater, literature, television, and movies has long provided rich and valuable inspiration for artists seeking to critique contemporary society using parody, satire and dark humor. Inspired by the parallel ability of both the stand-up comedian and the artist to play the role of cultural observer and provacateur, this exhibition presents new sculpture, video, installations, and photography by artists, who strategically examine, with their frank observations and dry wit, the socio-political dimensions of power associated with cultural, racial, and economic issues. Titled after the longer idiom “tell the truth and shame the devil,” which means to speak honestly and without censor, these artists, following the long traditions of political caricature, offer up wry send-ups of political commentary on such critical issues as global poverty, racial profiling, anti-terrorist paranoia, and right-wing extremism. Artists include: Jabari Anderson, Elizabeth Axtman, Michael Britto, Wayne Hodge, My Barbarian, Huong Ngo, Jessica Ann Peavy, Sara Greenberger Rafferty, Jimmy Joe Roche, and Kenya (Robinson).