Chinese New Year is a time for joy, cultural pride, family/chosen families❤️, and celebration. We have lived with too much fear and injustice, to dim our brightness, to suppress our expressions of love. We say wishes for good things in the new year like every year, and mean it, like every year. We are certain in our hearts of our right to belong and to be safe. We gather in community because culture is how we nourish and care for one another.
BTS lettering for #ExhibitionDesign @ccaexhibitions. Recognitions opens Jan 25.
🪜 👷🏻‍♀️🛠 CCA Install Day 1: Inaugurating a new gallery/construction site. // It’s been a minute since I’ve been in install mode, as an artist or art handler. High-waisted work pants never lie, but really, snapping a pencil (!) in half in the pocket at the knee was a first. 🤫🫣🤭 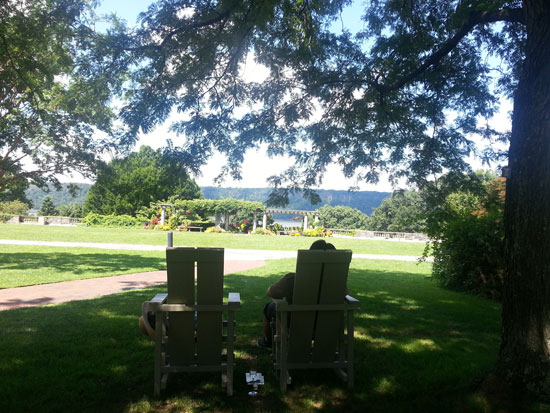 Relaxing after a hike in the woods and in the galleries at Wave Hill, Bronx, NY.

Today I visited Wave Hill, a public, NYC-owned garden and art center in the Bronx. It’s one more place checked off on my ongoing NYC Art Itinerary.

As soon as one enters, there’s a spectacular view of the cliffs of the Palisades across the Hudson River. The grounds are not insurmountably huge, but the landscaping is impeccable, and the trails, walks and greenhouses offer lots to explore.

M and I got there early, and I highly recommend doing the same. We virtually had the place to ourselves for the first hour. It was a lovely change of pace to explore the gardens at our own unhurried pace. We encountered empty gazebos where we enjoyed the serenity to ourselves. Technically we weren’t even outside of the five boroughs, but it felt a universe away from the crowds.

We visited the Glyndor Gallery, which had an exhibition of works by artists in the Bronx Museum of Arts’ Artists in the Marketplace program. The work was all over the place, including abstract installations, brushy paintings, some technically capable and cool photography, sculpture, videos and video installations, and a metal assemblage wall work. The most captivating for me was Elisabeth Smolarz’ $100 project, a 13-channel video installation documenting her visits to every G8 +5 country and seeing how many people she could hire for $100 for one hour, and what they would do.

We also visited the Sunroom Gallery, which is reserved for emerging NYC artists’ solo projects. It’s a challenging space, with two walls of windows, and the remaining two walls made of brick and punctuated with many doors. There are also four skylights. My impression was that the original intended use of the space—to view the outdoors—still dominated the space; the meadow, woods, river, sunlight, and breeze beyond the windows seem to call for the viewer’s attention and pulls one towards a reflective mood.

M surprised me by suggesting a visit to the Museum of the Moving Image. Though it’s in Queens, I’d never made it there, so it found its way onto my 2013 NYC art itinerary.

M had heard that the exhibition design is particularly good, which turned out to be delightfully true. But let me start with the bigger picture.

First, the building itself is really cool: beautiful typographic and graphic storefront window treatment, intriguing angles, gleaming white surfaces, spacious, modern and LEED-certified. The gallery spaces were full of character, yet allowed the artifacts, photos, and videos proper presentation. For example, there was a GIF project in the foyer; sometimes foyer projects get the short shrift in presentation—like a flat-screen installed randomly in an imposing antechamber. Here, five projectors screened a massive three-part composition, plus a didactic text. It was seamless, huge, yet because of the pace of the animations, it was not overwhelming—I thought it was perfectly installed and curated. It set the tone for the ambition of the institution nicely.

Second, the exhibition design is super cool. Clearly they are not skimping on signage, wall graphics, dramatic paint treatments, etc. Typographically the Spectacle: The Music Video exhibition was stellar—the exhibition title was in neon (!) while a historical section used hundreds of square feet of printed vinyl to add loads of charm to older videos. (Queen’s Bohemian Rhapsody, did you know, was shot in 4 hours and edited in 5? No excuses!)

One challenge with media shows is audio-bleed—and the museum was managed it in a variety of ways. On the first level of the show, a lot of restraint was used, allowing the sound from large theater to spill over into the exhibition area, where all videos were on headsets (though the light-bleed on the projection was less than desirable). On the second level, parabolic speakers, as well as speakers set in long boxes, like pedestals mounted to the ceiling, directed the sound to specific areas.

Overall I was really impressed with how beautifully everything was staged—the lighting and spatial design was directed, soft, yet dramatic. There was stagecraft, such as a neat short-throw projector that used a mirror to cast a huge projection just a few feet from the lens. I also appreciated a captivating edit of Beyoncé’s Single Ladies video with its dozens if not hundreds of YouTube re-makes. By presenting a video mosaic, which scrolled to different sections and zoomed into individual videos, viewers got a sense of the global popularity. It brilliantly unified a ton of user-generated content, but it took directorial and editorial vision to get there. Money, time, and expertise went into all of these strategies. For installers like me, it is appreciated, while visitors value it by way of just seeing the content, vibrantly displayed.

There is a lot to see, beyond the temporary exhibitions. The permanent exhibition, with vintage film cameras, cathode ray tubes, mics, and even some Muybridges and a zoetrope, will be educational and fun next time I return, which I surely will.