The test worked great so I drafted a cut list for the full scale project. Working with vinyl is a lot like making a sewing pattern, and sewing is a lot like woodwork. You come up with plans and dimensions, then adjust for overlaps.

The sculpture has multiple parts, and is made by layering four different patterns 30 times, so there’s a lot of pieces to be cut. I got them sorted with a spreadsheet and good old tallying.

Whew! After a day of cutting, over 500 pieces are ready for assembly. My cutting mats and straight-edge ruler are a bit further along on their lifespans after today.

A tentative exhibition design with sculptures represented in vinyl scraps. Even with digital tools, there’s nothing like moving scaled cutouts around a floor plan. (I learned how from my dad, when I was around seven. We were about to move houses, and he had drawn floorplans in ballpoint pen on graph paper, indicating closets with a charming coat hanger icon. We cut out tiny rectangles to stand for pieces of furniture, and tested out arrangements.)

M surprised me by suggesting a visit to the Museum of the Moving Image. Though it’s in Queens, I’d never made it there, so it found its way onto my 2013 NYC art itinerary.

M had heard that the exhibition design is particularly good, which turned out to be delightfully true. But let me start with the bigger picture.

First, the building itself is really cool: beautiful typographic and graphic storefront window treatment, intriguing angles, gleaming white surfaces, spacious, modern and LEED-certified. The gallery spaces were full of character, yet allowed the artifacts, photos, and videos proper presentation. For example, there was a GIF project in the foyer; sometimes foyer projects get the short shrift in presentation—like a flat-screen installed randomly in an imposing antechamber. Here, five projectors screened a massive three-part composition, plus a didactic text. It was seamless, huge, yet because of the pace of the animations, it was not overwhelming—I thought it was perfectly installed and curated. It set the tone for the ambition of the institution nicely.

Second, the exhibition design is super cool. Clearly they are not skimping on signage, wall graphics, dramatic paint treatments, etc. Typographically the Spectacle: The Music Video exhibition was stellar—the exhibition title was in neon (!) while a historical section used hundreds of square feet of printed vinyl to add loads of charm to older videos. (Queen’s Bohemian Rhapsody, did you know, was shot in 4 hours and edited in 5? No excuses!)

One challenge with media shows is audio-bleed—and the museum was managed it in a variety of ways. On the first level of the show, a lot of restraint was used, allowing the sound from large theater to spill over into the exhibition area, where all videos were on headsets (though the light-bleed on the projection was less than desirable). On the second level, parabolic speakers, as well as speakers set in long boxes, like pedestals mounted to the ceiling, directed the sound to specific areas.

Overall I was really impressed with how beautifully everything was staged—the lighting and spatial design was directed, soft, yet dramatic. There was stagecraft, such as a neat short-throw projector that used a mirror to cast a huge projection just a few feet from the lens. I also appreciated a captivating edit of Beyoncé’s Single Ladies video with its dozens if not hundreds of YouTube re-makes. By presenting a video mosaic, which scrolled to different sections and zoomed into individual videos, viewers got a sense of the global popularity. It brilliantly unified a ton of user-generated content, but it took directorial and editorial vision to get there. Money, time, and expertise went into all of these strategies. For installers like me, it is appreciated, while visitors value it by way of just seeing the content, vibrantly displayed.

There is a lot to see, beyond the temporary exhibitions. The permanent exhibition, with vintage film cameras, cathode ray tubes, mics, and even some Muybridges and a zoetrope, will be educational and fun next time I return, which I surely will.

AKA, “When Poor Curation Meets Bad Design and the Idea For an Art Show”

Before I go on an art trip, I try to weed out bad venues or weak exhibitions by scanning the web. In the case of Leeds Art Gallery’s “Rank: Picturing The Social Order 1615-2009,” the social premise sounded interesting and contemporary art was promised. Plus, an art blogger slammed the show so violently my curiosity was piqued. “Rank” was duly noted on my map.

Unfortunately, I left the show quite angry, and I had to side with the foaming-at-the-mouth blogger. I think the main problem is one of identity: the exhibition was advertised on art websites and mounted at the an art gallery, but “Rank” is not an art show.

“Rank” is a discursive educational exhibit dressed as an art show. The show’s organizers seem more invested in the wall texts than discriminating curatorial decisions. They would have benefited from looking to Britain’s wealth of great natural history and science museums for inspired exhibition displays, instead of making an art exhibition of not very much art.

Instead of changing tactics, the organizers filled the gallery with faux “works”—interpretative footnotes made by contractors. These contractors’ poorly-fabricated cakes (to illustrate pie charts) made me suspect they’re not artists. If they were exhibition designers, I suspect they would have better integrated the interpretations and didactic texts (like in the text-heavy yet eye-catching displays about inventors at the Museum of Science and Industry, or the energetic money exhibit at the Manchester Museum). Instead, putting interpretive works in picture frames caused confusion. Judging by the poor resolution of data (see Edward Tufte), and the odd choices of materials, I’d wager that they’re designers. (No offense. It’s my high esteem of design that makes poor design inexcusable). 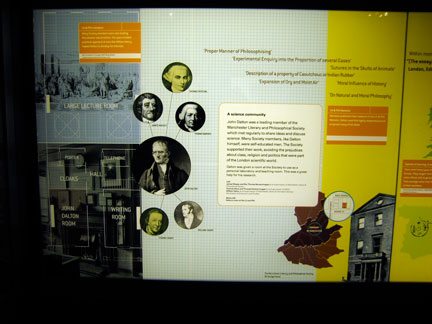 I don’t blame the contractors, however, so much as the show’s organizers, who probably offered the contractors a budget and free rein, and not enough direction or quality control.

Why did the show’s organizers commission these non-art interpretive footnotes? To present data borrowed from academics or print sources like The Economist. To pique interest in wordy didactic texts, abusing viewers’ inclinations to seek exposition about images, and supplying instead the organizers’ postulations. The information about the work seemed secondary—or, better yet, tertiary, as it was often buried in a text following a quote. (See burying the lede.)

I don’t mean to dismiss the art by contemporary artists in the show; they never stood a chance. The show’s organizers devalued the artist’s contributions by installing the artworks alongside everything else, and not naming the artists in press materials or exhibition signage. They could have easily distinguished the art works from the non-art works. A little typographic contrast never hurt anybody.

Finally, the didactic texts were under-designed. In an art exhibition, wall labels should be quiet, so viewers can focus on the art. But in a show featuring information graphics, the wall label design could bear more visual appeal and graphics. For example, one chart that distinguished data with color lacked a key. The accompanying wall label should have included a color key; instead, the colors were explained in a block of text. What should be a holistic visual experience becomes severed and slowed. In another forehead-smacking move, four brilliant maps of global wealth were installed in a grid, but their corresponding years appeared in the wall label as a sequential list. Duh! Viewers had to guess the correspondence between maps and years. Again, a simple key would have sufficed. The researchers’ efforts—the quality of their data and cartography—are put at risk by the poor wall text.

Had “Rank”’s organizers conceived of the show for what it was—an educational exhibit, with some artworks thrown in—I think it could have avoided some of its major failures.