In no particular order, I submit some exhibitions, passages, and ideas worth savoring. Get the stockpot ready;  offcuts are best after a low and slow simmer.

I’d only read about this installation involving tons of used sump oil in installation art books and on Matt’s Gallery’s website. It was a delight to stumble upon it in the Saatchi Gallery. It doesn’t look like much; but you have to be there to understand its depths (literally and figuratively). 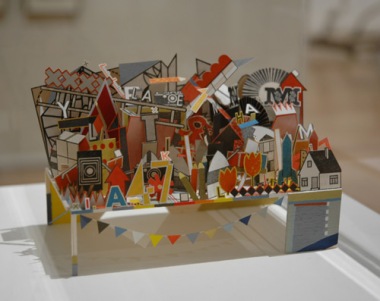 I loved this for the typographic exuberance, plus who can resist the miniature pennant flags? But have a look at Brigland’s site—the less figurative work is quieter yet lovely as well.

Seen at Manchester Art Gallery’s The First Cuts exhibition. A neat survey of works on paper by international artists. A lot of nature/tree/leaf and bird artworks—maybe too many.

He works in a sweet, illustrative vein, making children’s books and gift cards. Not unlike Nikki McClure. 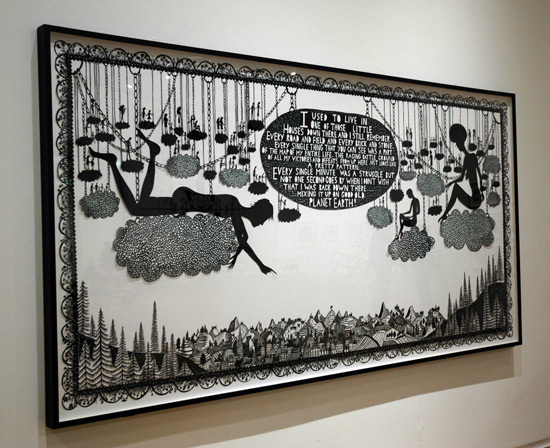 I had the sad experience of watching museum goers fail to engage meaningful artworks. I was able to find a silver lining—which could mean I’m an optimist, finding the positive, or maybe I’m a cynic, so low are my standards.

When a group of museum goers encountered  silhouettes by a well-regarded artist, they didn’t register the horrifying narratives of slavery, rape, mutilation and vengeance. Instead, they took photos of themselves mimicking the pose of one pair—a gentleman taking the hand of a Victorian lady. Ugh!

Though I was morally outraged, I was able to find a comforting logic: If even this artist’s work can be regarded so flippantly by “viewers” (the label seems to be an overstatement in this case), then it can happen to any artist’s work. So, if it happens to my artwork, I don’t have to take it personally. It’s not my problem.

Dust bunnies under a Richard Serra sculpture at the Tate Modern. I’m glad I don’t have to sweep under gigantic, unfastened sheets of steel, and it looks like no one at TM does either.

Brilliant. Two identical lightboxes; one hangs upside down from a motor on the ceiling. As it lowers, the room is washed with greater intensities of light, until the tables meet and seal the light inside, and the room goes dark, like a supernova, except for a fine horizon line encircling the room. A perfect Minimalist gesture, loaded with content if you consider Jaar’s interests in history, who tells it, etc. 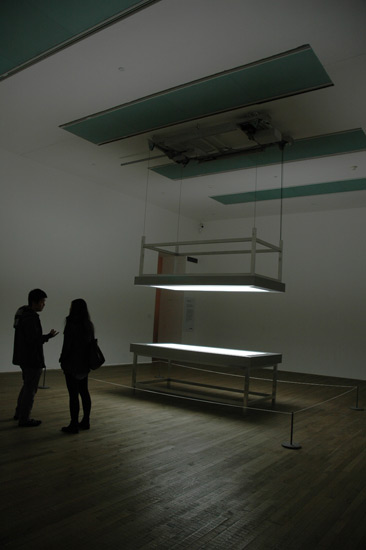 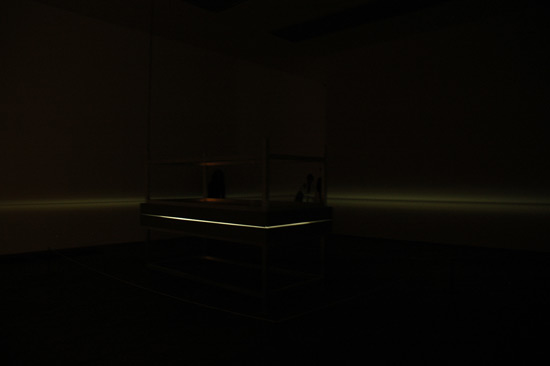 When I think of early language and conceptual art, I think of b/w photos and videos, often of white, Western men. So learning about Partum, a female Polish artist pioneering conceptual art and feminist performance in the 1960s, is exciting. More info at tate.org.uk. 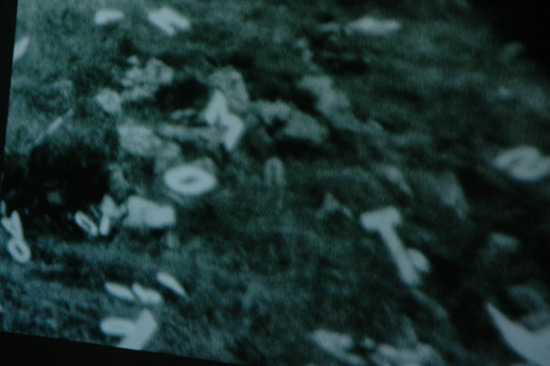 Yinka Shonabare had some amazing public installations (love the Fourth Plinth project!) in London, and when I saw this baobob tree covered in world textiles at the Southbank Centre, I assumed it was a work of his as well. But it’s not! It’s but MA Textile Arts students. I love it, I think it’s brilliant especially in connection with this summer’s Olympics, signaling a place for the whole world to gather.

Really became a fan of Art Update’s booklet-format gallery guide. Each neighborhood in London had its own spread: maps right next to listings. 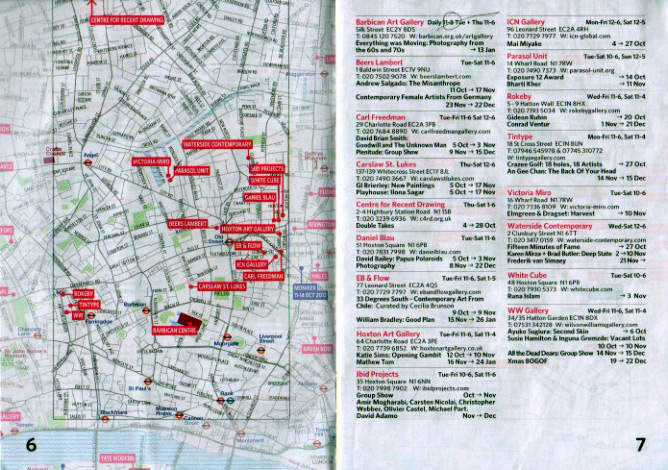 A spread from my well-traveled copy of Art Update: London.

The Liverpool Biennial had a lovely identity, but way finding was not its best asset. Why separate the map from the listings in the brochure? Why put an arrow when a location was off the map, but omit the address? There were sandwich boards announcing that you’ve found a location, but not many signs helping you get there, or find the entrance (as much needed on the Cunard Building). I walked around Flag Exchange looking for flags or an exchange, only to see that the design-conference-y tents were the artworks… <disappointment> …I think?  <Uncertainty.> It was too cold (upper 30s, and I had only a light jacket on) for me to care <indifference>.

From “Tiny Beautiful Things: Advice on Life and Love from Dear Sugar” (2012):

Let whatever mysterious starlight that guided you this far guide you onward into whatever crazy beauty awaits….

Something to aspire to:

What do you do when you don’t know what to do about something?

…I attempt to analyze the situation from the perspective of my “best self”—the one that’s generous, reasonable, forgiving, loving, bighearted, and grateful. I think really hard about what I’ll wish I did a year from now…. I move towards the light, even if it’s a hard direction in which to move.

And, for artists (myself included) who think of themselves upon hearing of other artists’ successes:

You know what I do when I feel jealous? I tell myself not to feel jealous. I shut down the why not me? voice and replace it with one that says don’t be silly instead. It really is that easy. You actually do stop being an awful jealous person by stopping being an awful jealous person. When you feel terrible because someone has gotten something you want, you force yourself to remember how much you have been given. You remember that there is plenty for all of us. You remember that someone else’s success has absolutely no bearing on your own. You remember that a wonderful thing has happened to one of your … peers and maybe, if you keep working and if you get lucky, something wonderful may also someday happen to you.

And if you can’t muster that, you just stop. … There isn’t a thing to eat down in that rabbit hole of bitterness except your own desperate heart. If you let it, your jealously will devour you….

I know it’s not easy being an artist. I know the gulf between creation and commerce is so tremendously wide that it’s sometimes impossible not to feel annihilated by it. … the people who don’t give up are the people who find a way to believe in abundance rather than scarcity. They’ve taken into their hearts the idea that there is enough for all of us, that success will manifest itself in different ways for different sorts of artists, that keeping the faith is more important than cashing the check, that being genuinely happy for someone else who got something you hope to get makes you genuinely happier too.