Japan 🇯🇵 art trip, part 1. Continuing as a Mindscapes AIR, I traveled from India to Tokyo to #Karuizawa, a resort town 🌲 in the mountains 🗻 of Nagoya. Over a week, I worked with about 40 community members in 5 workshops organized by Hocchi No Lodge ほっちのロッヂ, a clinic with an artist residency program.
My publications ✨ on belonging are at the Gropius Bau ☺️ in Berlin! They're in a Resonance Room for a new exhibition that just opened, around care, repair, and healing (link in bio). The exhibition is part of Mindscapes, an international cultural program on mental health by the @WelcomeCollection.

While Pistoletto is well-known for his mirror pieces, he has also been creating Cittadelarte, a non-profit with numerous working groups re-imagining art, life, work and more. I’m not quite sure I understand what it is, as much as glean a sense of revolutionary possibility from it. I thought I’d visit if I ever make my way to Italy, but it turns out I don’t have to go there to participate. See below for a worldwide Cittadelarte participatory program coming this December.

Bishop, on the other hand, is no fan of participatory art, and is in fact launching her latest book, Artificial Hells, at CUNY’s Martin E. Segal Theater tomorrow night.

Hold these opposing thoughts in your mind, if you can:

A searing critique of participatory art by an iconoclastic historian

Join art historian Claire Bishop and Carrie Lambert-Beatty in conversation at the Martin E. Segal Theatre to celebrate the launch of Bishop’s new book, Artificial Hells: Participatory Art and the Politics of Spectatorship.

Since the 1990s, critics and curators have broadly accepted the notion that participatory art is the ultimate political art: that by encouraging an audience to take part an artist can promote new emancipatory social relations. Around the world, the champions of this form of expression are numerous, ranging from art historians such as Grant Kester, curators such as Nicolas Bourriaud and Nato Thompson, to performance theorists such as Shannon Jackson.

Artificial Hells is the first historical and theoretical overview of socially engaged participatory art, known in the US as “social practice.” Claire Bishop follows the trajectory of twentieth-century art and examines key moments in the development of a participatory aesthetic. This itinerary takes in Futurism and Dada; the Situationist International; Happenings in Eastern Europe, Argentina and Paris; the 1970s Community Arts Movement; and the Artists Placement Group. It concludes with a discussion of long-term educational projects by contemporary artists such as Thomas Hirschhorn, Tania Bruguera, Paweł Althamer and Paul Chan.

Since her controversial essay in Artforum in 2006, Claire Bishop has been one of the few to challenge the political and aesthetic ambitions of participatory art. In Artificial Hells, she not only scrutinizes the emancipatory claims made for these projects, but also provides an alternative to the ethical (rather than artistic) criteria invited by such artworks. Artificial Hells calls for a less prescriptive approach to art and politics, and for more compelling, troubling and bolder forms of participatory art and criticism.
—

Rebirth-Day: the first worldwide day of rebirth
A great celebration throughout the world—a vital, living, breathing symbol of a new beginning.

December 21st, the winter solstice in the northern hemisphere and the summer soltice in the Southern, is a day celebrated by mankind since time immemorial.

A fateful “end of the world” connotation, as widespread as it is unfounded, has been attributed to this day in 2012, proposing a theme that is recurrent in mythologies and religions as well as in the literature of fantasy and science fiction.

All imaginative factors aside, this date can take on a symbolic meaning, as it effectively corresponds to a climactic phase of human history. We are progressing steadily toward an inevitable collapse—the science is there to prove it.

The whole of human society is now in the reckoning and so must face a historic transition, a complete change.

Humanity has gone through two paradises. The first, in which it integrated fully with nature; the second, in which it expanded into an artificial world of its own, which grew until it came into conflict with the natural world. It is time to begin the third stage, in which humanity will reconcile and unite nature and artifice, creating a new balance at every level and in every area of society: “an evolutionary step in which the human intelligence finds ways to live in harmony with the intelligence of nature” (Michelangelo Pistoletto).

A new perspective opens up that involves everyone, without exception, in the daily effort to implement the process of rebirth—each according to his or her abilities and possibilities.

On 21 December 2012, let us meet in streets and squares all over the world, and on the Web, to take part in the great inaugural celebration of the Third Paradise.

Participation in the Rebirth-day represents a personal commitment to the process of change….

In line with my previous work exploring optimism and pessimism using metaphors like light and dark and how art objects mediate relationships between artists and viewers, mirrorsblack literalizes the attempt to create phenomenological installations wherein viewers experience “mimetic engulfment” and the “dissolution of the self” (Claire Bishop, Installation Art: A Critical History, Routledge, 2005).

Literalizing concepts has been a way for me to point out my skepticism about the expectation that art should be transcendent or ineffable. By putting the viewer (or at least, his or her partial reflections) into the work, I’m also exploring whose expectations and meanings are projected onto the art object.

My engagement with this work was further stimulated by a recent article in the Boston Globe (Drake Bennet, “Thinking Literally,” Sept. 29, 2009) on psychologists’ research on how metaphors are not just a way humans communicate, but are in fact keys to the way we think. An implication of this experiment-based research seems to be that — as phenomenological artists have intuited for some time — while philosophers have valued abstract thought, and and conventionally-minded art patrons might prefer visual stimuli, bodily experience is no less a realm of cognition and the conveyance of meaning.

mirrorsblack suggests my ambiguity about the future, and the sense that one can never get a complete picture from any singular perspective.

Bellwether opens this Friday and Saturday with grand opening parties, including a block party with artist-led events. The exhibition continues through December 12, 2009. For more information, visit soex.org. 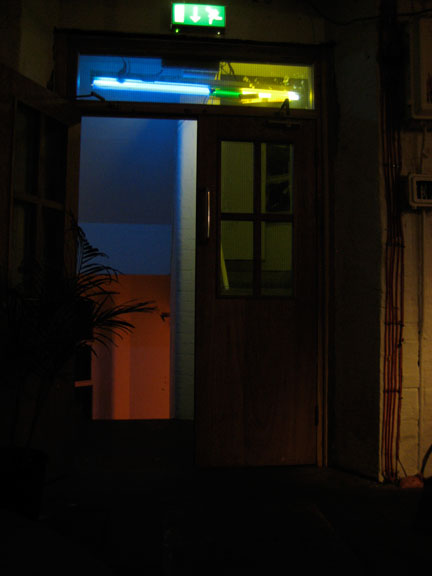 Islington Mill is a really cool artist-initiated studio compound with a gallery, performance venue, experimental school, and now, a new library focusing on art books. I find the whole idea of the place very grassroots, appealing and innovative.

detail of installation by Maurice Carlin 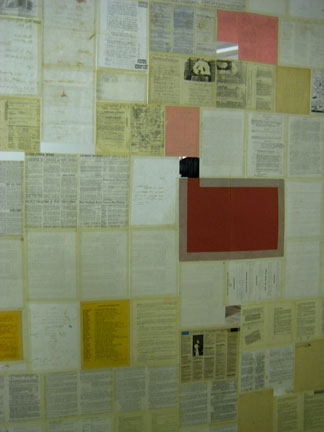 detail of installation by Maurice Carlin

Last night, I attended the opening of The Dilemma of Archive, a show featuring the work of Maurice Carlin and G. Leddington. The exhibition space is a disused studio — about the size of a bedroom, maybe 15×12 feet. But the modest space held a really tight grouping of four works, which were peculiar and quiet and rewarded sustained attention. 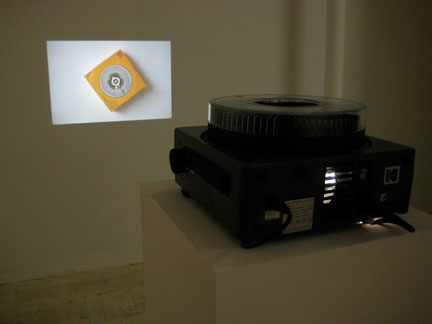 I really liked G. Leddington’s slide show of a turning carosel box, which reminded me of the work of Anne Collier and Tacita Dean. But Leddington’s accompanying works — photo prints of obscure articles, book plates and photos relating to Henri Michaux, art collector/smuggler swung the content away from the project of photography and back towards the archive.

My contribution to the new library.

The curatorial statement is quite smart, pointing out the paradoxes inherent in any archive — exhibitions, art collections or libraries. I really liked the high conceptual quality and grassroots venue partnered with the new library initiative. I keep telling people that Manchester is a cool city, and if they can look past the binge drinking and American-style malls, they’d see the local points of vibrance like Islington Mills.

I couldn’t be bothered to see this pitch-black, one-viewer-at-a-time installation — the wait times were always long, but today, by happenstance, I was able to get in after a brief 10-minute wait.

I won’t spoil what’s inside for those who yet to see it, but I will say this:

I found it extremely effective. It was emotional — the darkness was so complete it was terrifying, and upon exiting, my sense of relief gave way to a curious ecstasy. It was provocative and I experienced a sense of convergence between: