Prized possessions: What do they mean to their owners? How do they accomplish this? Where does our subjectivity end, and the thing’s objecthood begin?

I’ve been interested in this since starting graduate school, when I tried to change my practice from making art that represented an idea, to making art that embodied it. This quote from a Fluxus artist sums up the paradox beautifully.

We are all fetishists snared by the object…. The object is the vehicle of the affections… until they reach the flea markets of the world, where these objects continually pile up stripped of their magic and cut off from the memory of their history… All that remains of these preserves is the container the artists made for the time, the “can” the preserves came in…. The container will never interest me as much as the contained, but where would I pour my wine without a glass?

I’ve been interested in how possessions act as vessels, and it keeps coming up in different ways. In Irrational Exuberance (Asst. Colors), discount store goods triggered questions of value and taste. In reading Mihaly Csikszentmihalyi’s Flow and Creativity, I zeroed in on the psychological benefits of a symbolic ecology of the home for Positive Signs drawings.

This idea seems to be coming up more frequently from outside sources as well. Perhaps I’m noticing it more, or possibly a zeitgeist is coalescing…. Here are my notes from the field:

The Re-Museum … mirror[s] the process of collecting, displaying, attributing value to, and commodifying art objects by the institution.

Recognizing that souvenirs play a familiar role in the reinforcement of national ideologies, beliefs and rituals, The Re-Museum is selecting an array of souvenirs drawn from and representing issues and aesthetics embedded in our local communities. Through a variety of workshops and conversations created in partnership with local community centers we will select significant objects, sites, narratives and images from various DC communities to be housed in the Re-Museum.

The Re-Museum wil be making weekly stops at locations ranging from the Corcoran Museum to outdoor parking lots in Colombia Heights and Recreation Centers in Deanwood.

A life full of things – of personal relationships with the inanimate – only seems possible through the mediation of art, and so I prefer theidea of things, rather than the thing itself. 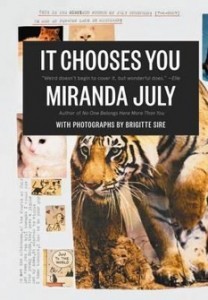 It Chooses You
Miranda July
McSweeney’s, 2011

July interviewed subjects who were selling possessions in the Pennysaver in LA. She asks them to talk about their items, and notes how they decorate their houses. The characters tend to be rather marginalized, so the stories are imbued with pathos.

Listen to Miranda July and actors read excerpts on WNYC’s Selected Shorts. Recommended. The idea of July’s work strikes me as self-consciously quirky, uncomfortably over-sharing, twee indie like Michael Cera, but when I actually give it a chance, it is always sincere and affecting. This reading is quite long, but very moving towards the end.

In the habituated scheme of modernity, objects are conceived as the passive stuff on which human action leaves its imprint or trace. Whenever this passive/active nexus between objects and subject, humans and the non-human is disturbed or even reversed—as in the coming-to-life of seemingly dead matter, or the becoming autonomous of inert things—we inevitably step into the territory of animism: that non-modern worldview that conceives of things as animated and possessing agency. Is it possible to de-colonize the imaginary manifest in the modern conception of the animist “other”, by bringing into view the practices that both make and transgress the distinctions and boundaries in question? 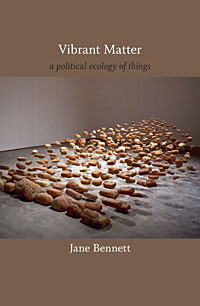 Lecture: Powers of the Hoard: Artistry and Agency in a World of Vibrant Matter

How do objects sometimes act as vibrant things, with an effectivity of their own, a degree of independence from the words, images, and feelings they provoke in humans? Political theorist Jane Bennett delivers the inaugural lecture as the Vera List Center for Art and Politics embarks on a two-year exploration of the material world. In the face of virtual realities, social media and disembodied existences, the center will focus on the material conditions of our lives and examine “thingness,” the nature of matter.

Renowned for her work on nature and ethics, Bennett investigates the power of things, which sometimes manifests as the strange allure that even useless, ugly, or meaningless items can have for us. Her latest book Vibrant Matter: A Political Ecology of Things (Duke, 2010) asks how our political world would approach public problems were we to seriously consider not just our human experience of things, but the capacity of things themselves. How is it that things can elide their status as possessions, tools, or aesthetic objects to manifest traces of independence and vitality? Following the tangled threads linking vibrant materialities, human selves, and the agentic assemblages they form, Bennett examines what hoarders – people preternaturally attuned to things – might have to teach us about the workings of agency, causality, and artistry in a world overflowing with stuff.

Finally, a call for prized possessions for exhibition: 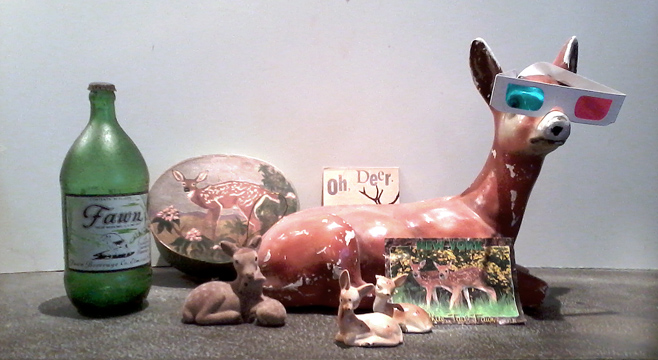 Wall Street to Main Street is pleased to announce an open call to all residents of Catskill and the Hudson Valley to share things you love in your home with your community in a beautiful common space. We ask that you bring one object that has inspired you and gives meaning to your life to be shown with your neighbor’s loved-things in a surprise exhibition located on Main Street.

Not to mention The People’s Biennial, curated by Jenns Hoffman and Harrell Fletcher.

Also, did you know that there are institutions named “The People’s Gallery” in San Francisco, California as well as Riverside, California;  Derry, North Ireland; Cork, Ireland; and Cheshire, UK. It was also the name of a 19th-century African American photographer’s studio in St. Paul, Minnesota, as well as the name of this year’s civic exhibition in Austin, Texas.