I’m co-presenting on creative aging with Nancy Simpson, a contributing artist in the "How I Keep Looking Up” project! So happy to continue learning about how creativity fosters resilience and belonging.
Thrilled to share good news!
What. A. Year. A lot has happened! Here’s some of what I’ve been up to.

In case you missed it, some of my Positive Signs drawings were interpreted as site-dependent drawings at Artery Art Space in their May exhibition, Material Practices in the Everyday. I really love how they turned out. Thanks to Artery for inviting me and making such great versions! 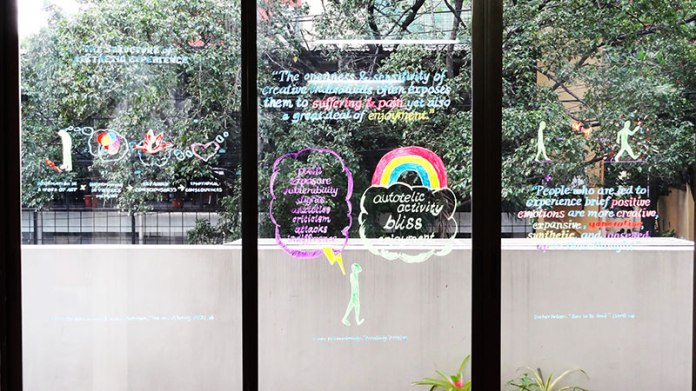 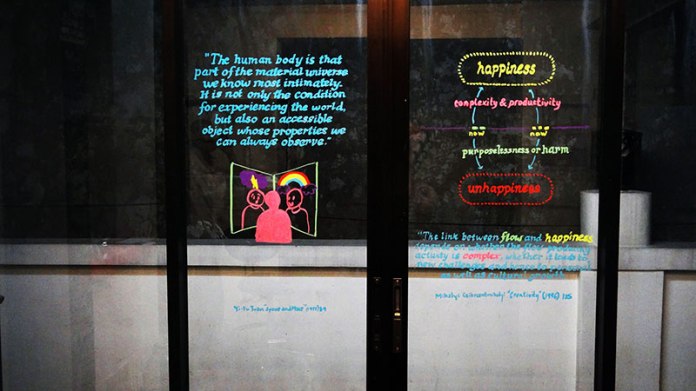 Carlos Celdran’s Living Room in Manila.
Galleon Trade’s home base in Metro Manila was also an artist’s residency and alternative arts space. It’s a large, beautiful room with a view of Roxas Blvd (which is sort of like Venice Beach) and the South China Sea. When a spacious, well-appointed room with lots of light is the first ingredient in building an artistic community, it shores up the importance of ‘home.’ 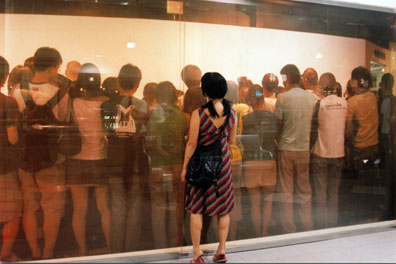 My shot of Poklong Anading’s installation at Finale Gallery in Megamall.
Stephanie Syjuco is on the outside looking in, a fitting symbol, I think, for the experience that many of the US-based artists engaged as visitors to the Filipino art community. 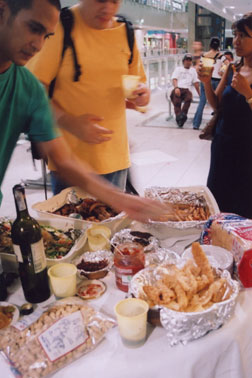 It ain’t a party without pancit. It’s plenty surreal to attend an art opening in a mall — let alone one accompanied with pancit, chicharron, queso-filled lumpia and fried broad beans. And red wine, touché. 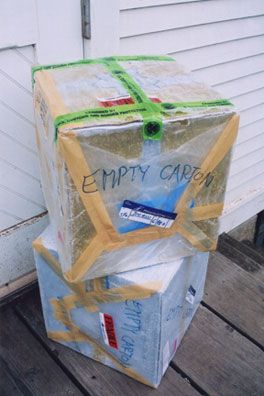 Balikbayanned. After a magical 10 days in Manila, re-entry to the US — the banalities, the rat race, the predictability — was rough. Similarly, the balikbayan boxes in the Regalos project went through their own ordeal as Galleon Trade mastermind, Jenifer Wofford, attempted to repatriate them via Air Cargo. As a transit-specific project (as described by scholar Eric Estuar Reyes), these new marks of transit bring the work to a different stage of the project. I’m looking forward to showing these works to a local audience at the Euphrat Museum in October. 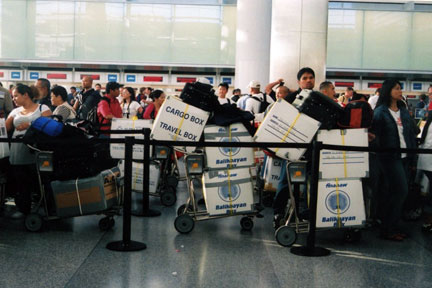 Context: Balikbayan* boxes and their owners at the Philippine Airlines counter at San Francisco International Airport. These boxes, and dozens more, were on my flight to Manila. In a testament to the impact of balikbayan boxes, their additional weight was enough to necessitate a re-fueling stop in Guam.
*Literally, “going home.” Can refer to (1) standardized cardboard boxes for shipping gifts to the Philippines or (2) overseas Filipinos returning to the islands. 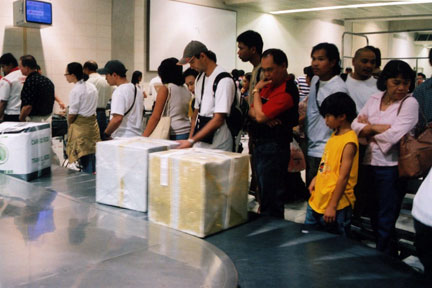 Process: My empty, glitter-covered balikbayan boxes for the Regalos project generated curiosity at the baggage carousel at Ninoy Aquino airport (MNL) in Manila. 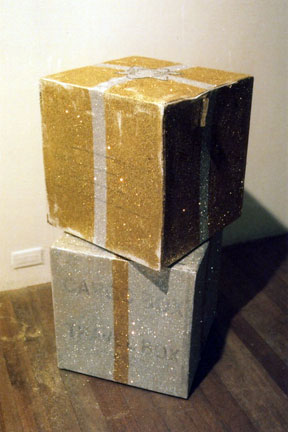 Product: The Regalos boxes on display at Green Papaya Art Projects in Quezon City. Some of the glitter was lost in transit, suggesting the entropy between giver and receiver or intention and material. I really liked how Eric Reyes, one of our academic counterparts in Galleon Trade, put it: “It’s not so much a site-specific project, as much as a transit-specific one.” He liked that the work showed marks of transit, and which I think reflects his interests in imperialism and migration.

In addition to interfacing with Filipino artists, I also took Galleon Trade as an opportunity to get to know and work with the other Galleon Trade artists, many of whom are busybusybusy back in the US. Being part of the Galleon Trade show at Green Papaya was awesome on all accounts: the exhibition was professional and it gelled curatorially (thanks to the planning of Jenifer, Mike, Stephanie, Eliza Barrios, Megan Wilson and PeeWee Roldan). And throughout the installation, when we gave each other honest feedback and discussed the works’ meanings and contexts, I thought to myself, “This is what it’s really about.” 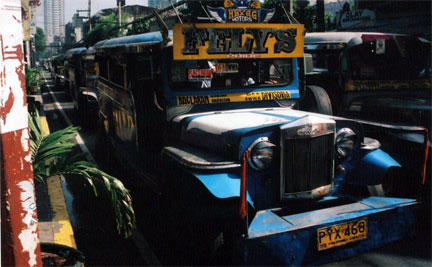 Jenifer Wofford is right: A tabletop book on Filipino street graphics is long overdue. As an enthusiast of typography and scripts, I enjoyed all the hand-painted signs, plump cursives, and florid jeepney ornamentation. Jeepneys are a quintessential Filipino mode of transportation; leftover from the U.S. occupation, jeeps have been assimillated as a key form of cheap public transportation. Jeepneys are loud, noxious, and–as any resident of congested M. H. Pilar Street in Malate, Manila might think–overabundant. Yet somehow, it works perfectly: they’re fast, the open windows provide a natural breeze, and there’s an unspoken honor system for passing the fare from rider to rider until it reaches the driver. They’re also richly decorated with spirit and personality, featuring everything from names of overseas workers to airbrushed murals (motorcycle riders or space scenes, for example). The mix of colorful typography with reflective metal is especially irresistible.

Though Manila’s traffic puts even the Bay Area’s congestion into perspective, there are lots of options for getting around, and some of them–like the tricycle–are lots of fun. The tricycle is actually a small motorcycle with a sidecar of welded steel for passengers. Riding through Teacher’s Village to have merienda (afternoon snack, including dinuguan and puto–pork blood soup and steamed rice muffins) at Mike Arcega’s tita’s house inspired a moment of sincere gratitude.

My honorary PhD in Fine Art from the University of Philippines, Diliman. The degree doesn’t actually exist; Mike Arcega had conterfeit diplomas made for the artists in the Green Papaya show to explore native economies. 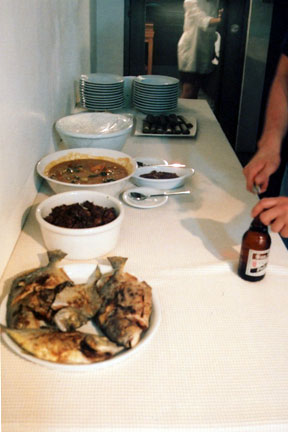 Galleon Trade artist Jaime Cortez camoflages with the Aristocrat Restaurant, “The Philippines’ most popular restaurant,” which also happened to be next door to our home base. Jaime shares a plate of eggplant-tomato-onion salad, which, when stirred, surprisingly resembles salsa — except with baggong (shrimp paste).

This small piece of paper cost me quite a bit of worry.
I saved 650 pesos for the airport exit fee, but the rate had just been raised from P 550 to P 750, and the booth was strictly cash-only. I was short 100 pesos, which translates roughly into US $2. The situation became worrisome when the airport’s two ATMs wouldn’t accept my card. Worse, I carried a traveller’s check that had been utterly useless in the Philippines. Ironically, the airline supervisor said that since this happens so often, PAL no longer keeps a petty cash box to help out their passengers. Instead, he suggested that I borrow money from other passengers and pay them back on US soil. (A bad idea — there wasn’t actually an ATM and retailer to make change at the arrival area at SFO.) Luckily, a sympathetic traveller freely contributed pesos to my (mortified) relief. Whew!
The funny thing is, so many taxes are tacked on to airfares, I probably wouldn’t have thought twice about a $17 fee on top of my ticket price. But the current system creates these mini-fiascos. For all the high technology involved in running an airport, is a credit card machine too much to ask?

[Image from Romeo’s youtube video. Video by Eliza Barrios.]
Romeo Candido’s impromptu performance / goodbye gift to the Galleon Trade artists at The Living Room was really moving. With only two instruments — his voice and a loop pedal — Romeo created a full composition that crystallized a passing moment and brought everyone present with beauty. Romeo is a very talent filmmaker from Toronto working in Manila, and just by chance he happened to be in residence at The Living Room. I think almost all of the Galleon Traders were delighted by the affinity in our practices as North American artists trying to make a deeper connection to the contemporary arts in the Philippines.

Four days into my 10-day sojourn in the Philippines as part of Galleon Trade, I’d like to take a break to consider generosity and joie de vivre.

I’m really impressed with the amazing people I’ve met, such as the artist-gallery owners presenting the Galleon Trade exhibitions: Norberto “PeeWee” Roldan, an artist and designer who runs Green Papaya Art Projects, and Rock Drillon, an artist who runs the mag:net cafe.

Filipinos are famous for their hospitality, and combined with the professionalism and generosity I’ve experienced from our collaborators, I can’t say enough how nice it has been here. The gallery owners have really extended themselves to help create the exhibitions we envision, ensure local publicity (photos and articles in the Philippines Daily Star and Inquirer), and arranging for rock and experimental sound bands to play at the openings. We’ve also had the honor of landing at The Living Room, an alternative space run by Carlos Celdran. I have heard nothing but amazing things about Carlos’ tours (from Lonely Planet as well as individuals), and my experience on the Intramuros tour with Carlos even exceeded my high expectations. He conveyed a very complex history with pride, pain, humor and characteristic style. He made the sense of loss of his beloved city (after Gen. MacArthur’s carpet-bombing of the jazz-age city known as the ‘Pearl of the Orient’) tangible, yet the talk encompassed Filipino spirit and spirituality.

While class divides allow only a fraction of Filipinos to afford the lifestyle we are enjoying as American visitors, I have to say that I have developed a fondness for Filipino joie de vivre and patience (though dozens of jeepney and taxi drivers might be honking at each other non-stop, none seem to be angry). I can’t remember the last time I sat down to coffee in little cups and saucers to have a quality conversation, but here it seems to happen at least once a day. Maybe it’s because we’re guests on a short visit, but the small moments of mutual exchange underscored by generosity are very sweet and inspiring, and hopefully I can pull away from multi-tasking back home long enough to re-create them.