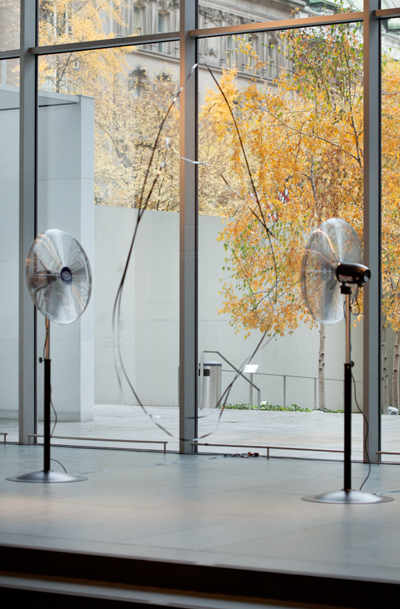 Zilvinas Kempinas’ Double O (2008) at the MoMA is a mesmerizing, extraordinarily simple installation in which fans suspend two loops of VHS tape in their intersecting currents. Have a look at the video on the MoMA site. The examples of Kempinas’ work that I first encountered seem like larger-than-life explorations of form and optics. Double O is a miraculous combination of simple materials, which prove to be just as effective as labor-intensive, perfect installations.

And the Pursuit of Happiness
A panel in the Live from NYPL! series and the Walls and Bridges Festival

This Franco-American panel of theorists and artists was a mishmash of languages, somewhat esoteric areas of academic research (via French Revolution specialist Sophie Wahnich and Ancient Greece expert Barbara Cassin), American common sense (no-nonsense artist/illustrator Maira Kalman), and likable, self-effacing irreverence (the author Daniel Handler, AKA Lemony Snicket). The Americans seemed like they couldn’t hang with the intellectual rigor of the French academics, while the French seemed oblivious to the idiomatic phrases and physical cues that made the Americans seem warm and entertaining to the audience of New Yorkers.

Unintended absurdity, evident investment in the topic, and the chance to see and hear examples of Kalman’s and Handler’s work and process kept me in my seat. However, at the end, I could hardly contain myself. The concluding question was “What makes you happy?” and nearly all of the respondents talked about losing oneself in skilled activity–yet no one mentioned Mihaly Csikszentmihalyi’s concept of flow.

Further, Handler divulged that happy conditions don’t inspire him to write. Italo Calvino’s short story, “The Adventure of a Poet”—which I wrote a post about a few days ago—is exactly about how much easier it is to represent the mundane, while the transcendent often begets cliché.

I was also interested to hear Wahnich discuss the centrality of the political self in the search for happiness. If I understand her—or her interpreter—correctly, she explained that the freedom to act politically—not necessarily in the civic sense as an activist or voter, rather the basic liberty of movement, speech, thought, and action—is fundamental to the pursuit of happiness. Handler said that the Declaration of Independence is a statement about how democracy must be homegrown; it cannot be installed by foreign powers, and it must be fought for by the people. Still, no one on the panel connected this talk about self-determination and the struggle for democracy with the grassroots democracy movement in Egypt today.

While the Declaration of Independence sought liberty for some men, and the struggle for civil rights in this country is far from over—gay marriage being the most obvious liberty, to me, that the state ought not deny its citizens—its passage on happiness and building democracy seems worth remembering at this time.

We hold these truths to be self-evident, that all men are created equal, that they are endowed by their Creator with certain unalienable Rights, that among these are Life, Liberty and the pursuit of Happiness.–That to secure these rights, Governments are instituted among Men, deriving their just powers from the consent of the governed, –That whenever any Form of Government becomes destructive of these ends, it is the Right of the People to alter or to abolish it, and to institute new Government, laying its foundation on such principles and organizing its powers in such form, as to them shall seem most likely to effect their Safety and Happiness.

Caught Free at the New Museum before it closes on January 23rd. By chance, I saved the best for last: Alexandre Singh’s multimedia installation, an installation as theatrical “play,” with inanimate objects as actors. Found objects were lent WASPy perspectives and political positions in surround sound audio tracks and theatrical lighting. It was entertaining, which made the fact of sitting in a room looking at common objects even more strangely compelling.Thankfully, Free is accompanied by an online catalog, with more info on the installation.

This installation of colorful, rainbow-palette Venetian blinds and scents occupies the New Museum’s ground floor glass-walled installation space. It’s a fun installation that invites people to walk thru, dipping under portals and encountering semi-enclosed spaces to sniff different scents. I was most interested in the parallels I found with my own work; in the statement, Yang professes an interest in happiness, and colors “on the edge of taste.”

America considers the pursuit of happiness an inalienable right. But where is this pursuit taking us? How valuable is positive thinking? In arts, melancholia has long been a source of inspiration. Specialist of Ancient Greece Barbara Cassin will give a philosophical point of view on the topic, and historian of the French Revolution Sophie Wahnich will bring some insight on the conditions of happiness. They will be discussing with co-authors of 13 Words Lemony Snicket (Daniel Handler) and Maira Kalman, also New Yorker cover artist and author of the acclaimed And the Pursuit of Happiness.