The simultaneous experience of looking, reading, and thinking in this mostly-hand-lettered and hand-drawn notebook explaining her curriculum and lessons on leading classes combining image and word made me want to reach out for my notebook and pencils and fill every page with abandon. I’ve been using exercises in my own studio to loosen up, and filing away other ideas to try with future workshop participants. Syllabus is published by the illustrious Drawn and Quarterly. I am working my way through it, to savor each section.

You can see Lynda Barry’s Face Jam Exercise on the NewYorker.com. It’s from another book of Barry’s, Making Comics. 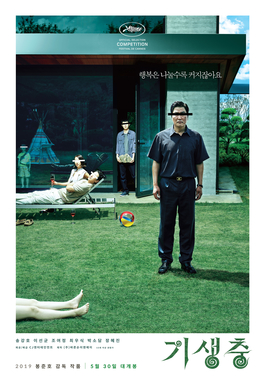 You don’t need me to tell you that Parasite is masterful, and very much worth viewing on the big screen. I’ll say it anyway, since I’ve been enjoying more films lately, especially films by people of color. It’s also really cool to see a foreign language film embraced by US audiences in record-breaking numbers. 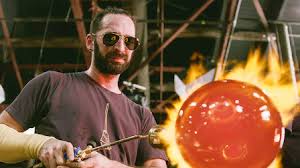 Still from Blown Away. Source: Netflix.

This Canadian reality TV series was released on Netflix this summer, and I just binge-watched it this week. Despite the fact that it’s a formulaic competition show with goofy hosts and oddball challenges, I loved it.

There have been other artist reality shows before, but none have necessarily revealed so much craft and skill. My heart went out to the glassblowers. Many were extremely skilled, and really deserved honors for their accomplishments, which were not afforded by the structure of the show.

My only other qualm is that the show didn’t show enough glassblowing technique continuously. They could have followed each individual project from start to finish for a half an hour and I would have loved every minute. The makers are casting for season 2. I hope they reconsider having students as assistants—it’s far too much pressure on the competitors and the students.

Blown Away made me yearn to blow glass again. I only did hot glass for two semesters in undergrad. It’s very addictive, like wheel throwing—once you get the bug, you just want to be blowing glass, challenging yourself, and being in the zone all the time. I miss that sense of being in sync with the material. Also, there were tools and techniques I never saw as a beginner glassblower that I wanted to try. I never pulled cane, or used a soffietta!

The other week I was using markers from my set of 36 Pentel markers, when I realized that I’ve probably had this set of markers since 2015 or 2014. That would make these markers nearly 5 years old. All of the markers are still going strong. Granted, I don’t use them often, and usually only in small bursts for lettering, not for coloring. But still, that’s pretty impressive. I’ve had many ballpoint pens, gel pens, and calligraphy markers dry out or stop working; it’s refreshing when art supplies last.

I just found, that on the Pentel site, you can purchase individual markers for 99¢ each. So even if one of the colors did run dry, you could replace it and not have a horrible gap tooth in your rainbow palette.

Mel Day is a California-based artist who as been collecting videos of individuals singing and compiling them into installations. She’s been scaling up (way up!) lately, by partnering with San José Athletics, Marching Band, Choirs, athletes, fans, students and community allies to create a new, “evolving series of participatory massed choral video works and half-time live singing events” around Nina Simone’s “Feeling Good.”

You can contribute by recording your video from the comfort of your own home. You don’t have to be a “singer” to sing! Learn more at wallofsongproject.com.

6. Museum of Capitalism at the New School, on view through December 10

Spoiler alert: The Museum of Capitalism is a speculative project that invited artists to imagine the artifacts leftover from capitalism in a post-capitalist future. I saw the original iteration in a sprawling Oakland building a few years back. (I am still moved by Packard Jenning’s installation of a guided meditation for riot police de-escalation.)

A new iteration was is on view at the New School, including contributions by friends Related Tactics and Nyeema Morgan.

When I visited the exhibition, it felt to me that I hadn’t seen anything like it in NYC, that I hadn’t been in conversations in NYC that envisioned post-Capitalist perspectives.

There’s only a few more days to see the show. Find the address and hours here: https://www.museumofcapitalism.org/museum-of-capitalism-new-york-city

Batalá is an “all women Afro-Brazilian Samba Reggae percussion band. Batalá New York is a part of a global arts project made up of over 30 bands around the world.” I recently heard them play as they accompanied an Afro-Brazilian dance class. Wow! The beat is palpable in your chest. There’s something so cool about seeing women embracing power and massive volume, with unity and coordination. Check out their videos on YouTube.