I’ll be a visiting artist at @oxbowschoolofart this summer! Thank you @shannonraestratton and Ox-Bow for the invitation. This will be my first time as a visiting artist at an artist's residency and my first visit to Michigan. If you know any SAIC students who might be interested in the program, please encourage them to apply. I look forward to connecting with students, faculty and staff, and enjoying the pleasure of talking and thinking about art 24/7.
I'm honored to share the voice of an API community member speaking their truth, hope, and vision.
Despite everything, the good in people can be seen when we show up for our communities. ✊🏾I’ve been honored to have a productive place to put some of my energies and express APA solidarity through this group of folks. I was able to contribute artwork from my comic book, “Alive and Present: Cultural Belonging in S.F. Chinatown and Manilatown.” The ladies are Chinese fan dancers who practice in Portsmouth Square, San Francisco. The organizers in Flushing are in solidarity with SF, Oakland, Atlanta and beyond. No matter what, I’ll forever be on the side of people who work towards a future where we can all take up space, be who we are, in public, unapologetic and unafraid. ❤️

It’s hard to keep up—much less synthesize—current events, so here is a collection of ideas that have been resonating with me… None more than this:

“No one action will be adequate. All actions will be necessary.”

Note to self: If I question the value of individual acts of resistance, remember that more is more.

Case in point: The #nobannowall opposition—protestors’ and lawyers’ rapid response at airports, the ACLU’s legal cases, the Brooklyn judge’s emergency order, the win achieved by Washington State’s Attorney General, and the strike self-organized by 1,000 NYC Yemeni bodega owners. (Side note: If self-employed, precarious bodega owners can demonstrate such a unified show of force, when will artists? Why were strikers in the #J20 art strike dispersed among art-world institutions?) 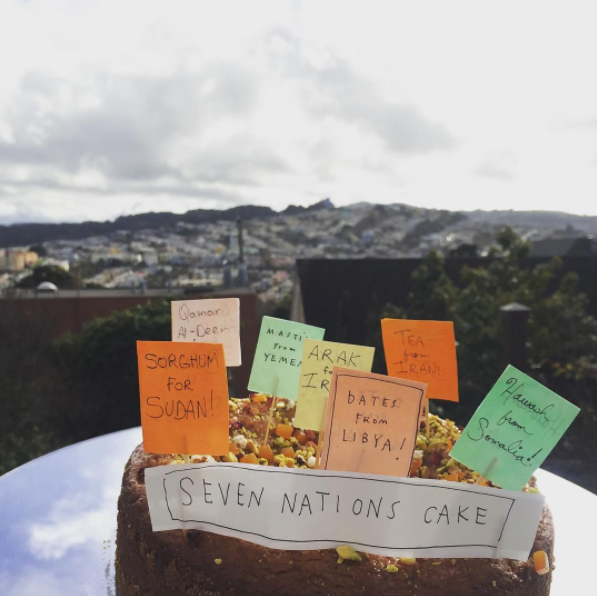 “Intersectional, intergenerational, intergalactic, international, interconnection. Even if it takes years, decades, centuries– any unit of time beyond my lifetime and my theoretical grandchildren’s lifetime– I believe in action, I believe in compassion, I believe in a plane of existence where peace is the default and not the exception. Do what you can to show up. Every gesture matters.” Source: Instagram: @YumiSakagawa.

Jenifer k Wofford’s NO SCRUBS intervention: joy in the face of repression, cultural workers making revolution irresistible, with women of color to the front.

“NO SCRUBS was a boisterous, fun dance brigade that injected playfulness into the SF and Oakland Women’s Marches. Their focused energy was fueled by fun, feisty tunes by women of color and quirky protest signs.” Organized by Jenifer k Wofford. // Source: Instagram @100DaysAction

Krista Tippett: “A cynic would say, ‘…they’re just drops in the ocean.’”

My mom’s Chinese New Year’s preparations. Citrus and lettuce represent wishes for prosperity. Tamarind is not a traditional offering, but my mom likes it because there was a tamarind tree near her home in Vietnam. In Chinese, pink is considered light red, the color of luck.

I flew back to the Bay Area to visit family. The next day, Lunar New Year, the Muslim ban, and the gravity of DJT’s reckless nationalism began.

I watched videos of protests at SFO and JFK as my mom happily arranged Chinese New Year’s offerings for peace and prosperity. It was surreal to think that my parents—who came to the US to escape war and fear of persecution in Vietnam and mainland China—might not be welcomed today.

I didn’t do anything to earn citizenship. I was granted citizenship because I was born here—a simple quirk at the complex nexus of my parent’s tremendous sacrifices and generations of people who fought for equality. When I think about how hard immigrants have to work to become naturalized, it makes me want to be deserving of citizenship. Engaging as an active citizen seems a small price.

At the San Mateo History Museum, I saw register books for “enemy aliens”—Japanese, German and Italian Americans. I thought about how such xenophobic, unconstitutional acts seemed like relics of the past not too long ago, but could be seen as part of a racist continuum now (and indeed have been cited as legal precedents).

My past internalized racism also came to light. A a youth I disdained the peninsula and the South Bay; I thought they were boring and lacked culture and worldliness. But I looked at things differently as I drove around San Mateo and visited a pan-Southeast Asian Buddhist temple in San Jose. While the region may be short on high or alternative cultures, its unfussy integration of Asian and Pacific Islander cultures into suburbia with mid-century vernacular architecture and design, is specific and kind of wonderful.

It renews my gratitude to call  both the San Francisco Bay Area and Queens home. What I love most about the two are their richness of cultural diversity and the simpatico afforded by progressivism and tolerance. I don’t feel split or unrooted. I feel “multi-centered.” Is that such an odd proposition? My mom is shaped by three countries—the one of her heritage, the one where she was raised, and the one she emigrated to.

I just started reading Lucy Lippard’s The Lure of the Local: Senses of Place in a Multicentered Society (1997). The idea of belonging to a place, and at the same time, to an interconnected world, seems especially meaningful.

Some tidbits of creative inspiration:

[I’ve been holding on to this one because it’s like a make things (happen) activity waiting to happen, if presented as visually-oriented handout for download. But it seems worth sharing now; the time is ripe for planning and self-determined goals.]

I liked how Kevin Chen recently described five areas of life (figure 2): a romantic relationship, friendships, family, practice, and job(s). In this schema, “productivity” accounts for only two-fifths of life, and relationships account for a majority.

I realized that I’d held a three-part schema (figure 1): work, practice, and personal life. This short-changed other people and explained why I always felt like I was failing someone.

I suppose I might add two more “houses” to a revised schema (figure 3): “me-time” and citizenship/civic engagement. This might be a temporary mode for the next few years, that incorporates both activism and self-care. In this case, people still occupy the majority.