Free graphic available in my link in bio, in solidarity with striking UC professors and MFA Boston museum workers. Unions have won so many things that make life for everyone better and more humane. Regressions and disruptions are only gonna keep increasing income inequality and disparity if there’s no pushback.
I’m doing a virtual studio tour of the printshop at @kalaartinstitute and my recent works via a series organized by @steloarts on Wednesday at 5:30 Pacific. Link in @steloarts bio to register. Free and open to all. It’ll be chill, Come and ask me anything. 😀
"It takes time to love and to love yourself. My flag design is about healthy relationships, boundaries, and self-love.” —Brianna Parrish

AKA, “My Art Highlights from Birmingham, Liverpool, Stoke-on-Trent, Manchester and Leeds.”

The Chinese Arts Centre offers a travel stipend for Breathe artists-in-residence to conduct research within the U.K. Earlier, I attended the Fly Eric symposium in Barrow, and the Global Modernities symposium in London. This past weekend, I, along with the good-humored traveler N.M., sought out contemporary art in Birmingham, Liverpool and Leeds. The skies were grey and misting, and clocks would not cooperate with us, but we pushed onwards and we were rewarded with some gems among these Northern industrial cities.

I’ve heard that just as cars represent freedom to Americans, the rails are a symbol of escape for the British. I can see why: On the train to Birmingham, I found a quiet car, opened a good book, and felt that my modest expectations—passing scenery and a period of uninterrupted time to think—were all fulfilled. I was flooded with a sense of contentment.

Since I visited Annette Messenger’s exhibition at the Hayward Gallery in London, I’ve been thinking about her premise that one cannot talk about happiness without clichés. It’s a maxim I find both truthful and discouraging, so unexpected contentment, in its minor way, is somewhat miraculous. 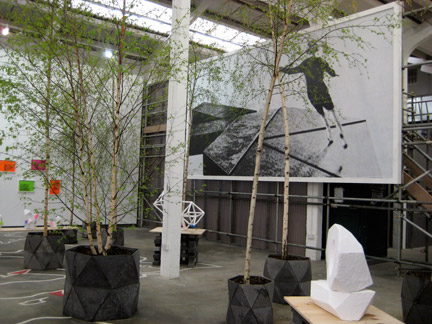 Contemporary art can require a sense of adventure—sometimes quite literally. On the quest for it, you will find yourself on the ‘wrong’ side of the tracks in strange cities, seeking out alternative art spaces with little to no signage, and having faith that the artwork will be cutting edge and worth the effort. Such was the case with Eastside Projects. Nestled between junkyards and auto shops, this artist-led gallery is a spacious, high-ceilinged warehouse showing top-notch contemporary projects. It’s keen on conceptualism and new media (it features a semi-permanent Lawrence Weiner text work and a large video screening room, and the office is housed in an absurdly impractical structure made by artists). The current exhibit, Simon and Tom Bloor’s “As Long As It Takes,” is visually attractive, conceptually rigorous, and cunningly specific to Birmingham. The twins present new sculptures, watercolors, drawings, a billboard and a limited edition print around the history of local modernist public sculptures. The shapes of the geometric models are strangely familiar—one recalls the structure in San Francisco’s Justin Herman Plaza. Like Aaron Curry, the Bloors use spray paint to defile Modernist purity. But a series of hand-painted watercolors, reproducing satirical newspaper cartoons complete with halftone dots, makes clear that the process of appropriation transforms the originals. Here’s what I mean: “high” modernist sculptures were parodied in a “low” editorial art from, which the Bloors re-made as “high” conceptual art. Brilliant! I really enjoyed the show, as well as Eastside Projects’ founder’s eclectic publications, including a series responding to R. Buckminster Fuller’s 40 Strategic Questions.

In the sunny side of town, IKON Gallery is an ICA in a converted cathedral, and it had the rare distinction (for this part of the U.K., anyway) of showing projects by three international artists. I was most impressed with the work of Armando Andrade Tudela, a Peruvian video/sculpture/installation artist. I really liked his installation involving only a sheet of survival-blanket mylar pinned to the wall by an industrial sheet of glass. It created two overlaid reflections: the glass offered a barely perceptible, but undistorted, reflection; the mylar, a picture of a fractured self. It made me think of Dan Graham’s use of sheet glass as a metonym for corporate power. This wasn’t Tudela’s expressed intention, but I noticed that other works, including walls skinned with pegboard, and woven works that were equal parts baskets and paintings, played with moiré patterns and perceptions too.

Also at the IKON, Manthia Diawara presented “Maison Tropicale,” a documentary video airing the perspectives of the former owners of Modernist prototype homes, which were later purchased by Ângela Ferreira for an exhibition at the Venice Biennale and re-sold at much higher prices. I found the story captivating, though the art and post-colonial politics were a mess, underscoring that there are no easy solutions, but an excess of guilt to go around.

Richard T. Walker's it’s hard to find you because i can’t quite see what you mean to me. 2009

Just before my residency, I was so busy I missed “Trying to Cope with Things that Aren’t Human (Part One)” at David Cunningham Projects in San Francisco. Luckily, the curator, Ian Brown, is based in this part of England, and brought the exhibition to Stoke-on-Trent’s airspace gallery. Richard T. Walker’s slide show of waving “hi” and “bye” to the sun is endearing. In the back room, two identical glass spheres are topped with polar caps that are revealed inside as icebergs.

“Until it Hurts”, a four-person exhibition at Open Eye Gallery, is organized around the mutability of identity, a theme in photography that can seem exhausted or obvious. Thankfully, two particular works in the show are precise and effective. Josh Weinstein’s video, “Cross Examination” (2005), is a quirky, feel-good documentary of strangers on the streets of New York hazarding guesses about the artist based on his, how do you say, humble appearance. The responses are weird, wonderful, presumptive and sometimes rude, but the artist maintains a disarming smile throughout. The effect is that viewers learn very little about the artist (except, maybe, that he’s enormously self-composed, and his art is rather generous), and a lot about the assumptions of others. Markus Hansen‘s “Other People’s Feelings” (2000-5) sequences pairs self-portraits with headshots of others as a video. In each self-portrait, the artist mimics the other people. It’s enchanting to compare and contrast Hansen’s feat of emoting, acting and photographing.

In 4×4 at the Bluecoat, David Osbaldeston presents a text-based billboard in mixed media, combining intaglio with digital reproduction, 19th century letterpress style with 21st century hand-done graphic design, and critical theory with vaguely subjective pie charts. The billboard’s lack of color, but richness of grey, is startling. Its paradoxes engage.

N.M. and I also stopped at the Tate Liverpool (Melanie Smith’s painting/video/installation in the DLA Piper show is still fantastic, as are William Blake’s bookplates) and the International Slavery Museum, which takes a frank look at how English slave traders and industrialists participated in and profited from slavery in the American South like cotton and sugar. (A U.S. National Slavery Museum, long overdue, is being constructed in Fredricksberg, VA, by the way.)

I am always surprised—though I shouldn’t be —when I come across references to the San Francisco Bay Area here in Manchester. For example, by chance, I read a book in Birmingham in which the narrator attends a lecture at CCA. And the traveling exhibition on Emory Douglas, Minister of Culture for the Black Panther Party, is now at URBIS, just a few blocks from the Chinese Arts Centre. I met Emory in Oakland years ago. I never would have put “Emory Douglas” and “Manchester” together. Luckily, someone at URBIS did. The quality of the exhibition is phenomenal, and Mancs should take note.

The whole exhibition—art, graphics, displays, historical context, and multiple voices and personalities—makes for a vibrant, thorough, interactive experience. I was happy to see lots of visitors taking their time absorbing the show, which in turns inspires shock, rage, pride, admiration, outrage, grief, and gratitude.

At Cornerhouse, I watched 24 Hour Party People, a movie about the early nineties Madchester music scene. I loved every minute of it. It’s the story of Tony Wilson—impresario, BBC personality and music promoter. He is portrayed with searing wit, a touch of madness, egomania, and an unflappably stiff upper lip. When he breaks the “fourth wall” of the film, it doesn’t make you feel like he’s over-explaining the narrative, but somehow helps to speed it up; aware, as brilliance is, of the fleeting nature of good times.

Perhaps my art tolerance was starting to flag, but Leeds bore the brunt of a more intensely critical eye. Asta Gröting’s exhibition at Henry Moore Institute was pretty good, even if I felt mostly pushed away by the hermetic sculptures, which varied wildly from spooky kinetic hemispheres around office chairs, to brass “potatoes” in chiseled angles, to an oversized clod of earth with no discernible referent, to a silicon cast of intercourse, to a Mona Hatoum-like beaded cage. I couldn’t sew it all together; the works seemed completely discrete in form, content, concerns. The only thing I could make sense of is the fact that Gröting was a student of Joseph Beuys; this may be stereotypical, but I find some meaning in the fact of her German-ness, as I’ve felt similarly—locked out of deadly-serious Art with a sense of mirthless laughter—about Martin Kippenberger’s work too.

Upstairs, the work of Keith Arnatt, an early adopter of American Minimalism, Conceptualism and Performance Art in Britain, is represented with a modest selection of black-and-white photographs, a text work, and a series of color sketches of geometric sculptures. I liked the photograph documenting a cubic hole in the earth lined with mirrors. Very simple stuff that any art student today might come up with, but at the time it was on the pulse of a movement, or two. I also liked “Self-Burial in 9 Stages,” a series of photographs documenting, well, the artist burying himself standing up, until only a patch of wavy hair is visible in the newly-turned earth. It really resonated with my recent thoughts about the dissolution of self in installations like Gregor Schneider’s Kinderzimmer (see Claire Bishop’s Installation Art, Tate, 2005), or the dissolution of the artist as in Josh Weinstein’s video at Open Eye Gallery, or the implicit denial in Chu Yun’s work (see Philip Tinari’s profile in the March Artforum, or this year’s Venice Biennale, whichever is handier). Incidentally, the trooper N.M. had a complimentary experience, engaging the drawings and passing more quickly over the photographs. Admittedly, given the chronological distance, the photos lack urgency, and while I’m usually not bothered by a gallery’s white-cube-ness, the presence of earthworks by way of only photos made the gallery seem especially sterile.

At the Leeds Art Gallery, I was intrigued by Shahin Afrassiabi’s installation, “Jalousie Gelocht, Als Blend Schultz” (2003), which is comprised of mundane objects like a television with nothing in particular onscreen, a roll of wallpaper, a table, a lamp, a funny blue geometric painting, etc. It was memorable because the TV emitted a brief, cheerful instrumental song. The pleasure was surprising, because I find that many installation artists create theatrical tableaux that rely too heavily on a “reading” of pathos to be meaningful.

I also enjoyed Angela Bulloch’s cubic sculpture, “Extra Time 8:5,” which was reminiscent of both Minimalism and sort of also a TV set. Furthering this mimesis is the fact that the single-pixel screen changed colors according to a BBC program.