Flow is an antidote to languishing. Here’s some drawings about flow.
<❤️art community appreciation post> 🙏🏾Thank you Jennifer k Wofford (@woffsilog) for the opportunity to show up and help restore the mural 🎨🖌she created to beautify mom-and-pop restaurants struggling to stay afloat during the pandemic.
What makes you feel ✨alive and present✨?

I really liked Kenneth Baker’s review of Kim Anno’s show at Patricia Sweetow Gallery (SF Gate, Sept. 26, 2009) — very concise writing about the work and the context of contemporary painting. How’s this for a tight lede:

New abstract painting arrives today in an interpretive hall of mirrors where quotation, pastiche and the cannibalizing of motifs by designers can instantly embarrass any claim to originality.

The review also mentions a show by stellar artists Walead Beshty, Patrick Hill and Karl Haendel at NOMA Gallery. I’ve been a fan of Haendel’s insanely detailed graphite realism since Glen Helfand’s Particulate Matter at Mills College Art Museum, and of Beshty’s since I saw his Fed-Ex’d glass cubes at the Whitney Biennial, so I regret missing the chance to see their work as well as Hill’s.

Another show I wish I saw was Ian McDonald and Conrad Meyers II at Queens Nails Annex. I totally loved Ian McDonald’s mixed media sculptures at Rena Bransten and YBCA’s Bay Area Now 5; in both exhibits he showed ceramics works that were functional yet their identities were somehow unhinged, with a lot of great material juxtapositions. His latest work about everyday objects and usability really resonates with my Pounds of Happiness project, but I just haven’t been able to make it over there…

Besides opening a show in LA last weekend, I’ve been logging hours at the studio…

…where I’ve been nerding out on behind-the-scenes art stuff, like: 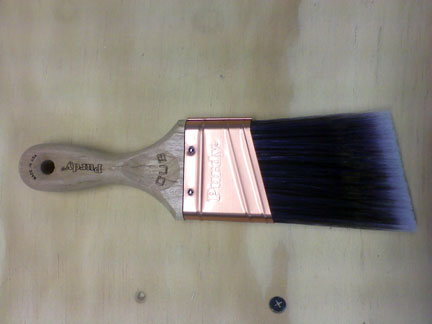 1. Taking joy in the small things in life.

I haven’t painted in ages, but that doesn’t mean that I no longer enjoy that brand-new brush buzz… This is my first-ever Purdy. It’s sharp as a razor, and it buoys my hope that craftsmanship can still exist within mass manufacturing.

Some things, though, don’t change: Wood stain, it turns out, smells exactly like the last time I used it, in junior high wood shop class. I’ve lost my printmaker’s tolerance for oil and solvent smells, but gosh, it’s satisfying to wipe down fresh stain and see the wood grain magically re-appear.

Lately, I keep thinking back to Mr. James’ shop class, and my dad’s garage, because those are the places where I learned most of my woodworking skills. I picked up a few things in college and grad school, and I’m picking up new skills quickly as a preparator. But the foundation is the same, and certain traits seem to show through. For example, in junior high I found the jigsaw and bandsaw least intimidating, and to this day I still use circular saws with extreme respect and caution. I also still appreciate my dad’s improvisational handyman approach — try to use what’s around, instead of running to the store for every little bit of hardware or new tool — and his good humor inherent in tinkering.

This crate, which has a detachable compartment, took about:
— 2 hours to design,
— 2.5 hours procure and unload the materials, and
— a solid day and a half to construct.
To move the crate, though, is gonna take three people and a truck.

(A recurring puzzle: Why do people think that artists just make art all day? When in fact, there’s so many other things that need to be done, like making crates, storing stuff properly, framing, writing, reading, research, procurement, bookkeeping, seeing art, talking to people, emails, etc. That’s why CARFAC Canadian Artists’ Representation / Le Front des artistes canadiens is so exceptional: it reflects an understanding that an artist’s work extends beyond studio work and exhibition installs. See their PDF guidelines for Professional Fees, which include admin and preparatory work, as distinct from baseline Exhibition Fees.)

This crate is for mirrorsblack, my newest sculpture, which will be unveiled at…

Friday, October 16, 8–10 pm (Member’s Opening)
Saturday, October 17, 4–10 pm (Public Opening)
October 17–December 12, 2009 (exhibition)
Bellwether
Southern Exposure, 3030 20th Street, San Francisco
I stopped by SoEx’s new digs the other day and it’s all abuzz with activity. Their purpose-built gallery/office/classroom is brand spanking new. I can’t wait for the inaugural exhibition to launch. There’ll also be loads of activities and artist’s projects at the Public Grand Opening / Block Party, so hope to see you there.

Monday, October 5, 7:30 pm
Fred Tomaselli lecture
SF Art Institute
Tomaselli’s resin-cast mixed-media paintings are mind-bending. His works in MOCA’s Ecstacy show were trippy and hallucenagenic enough, but his more recent work at White Cube were completely stunning. He also seems like a down-to-earth kind of guy. I think his lecture will be great.

Thru December 12
Moby-Dick
Wattis Institute for Contemporary Art
Though I helped to install this show, I didn’t get to spend much time looking at the work, especially the media works. I’d love to spend more time with the lovely paintings by Marcel Dzama, prints by Rockwell Kent, and the installation by Ellen Gallagher and Edger Cleijne. Also, I’ve heard high praise of the film by Peter Hutton.