I am fascinated by the debate around Confederate monuments. (Anti-racist, anti-white supremacist action is, of course, paramount. I’ll return to that in a follow-up post.) Here are some reasons I’m fascinated with the dialogue around monuments.

We are having a national conversation about public art.

Usually, art and artists are on the margins of society. It’s rare when art or issues around art are widely discussed by the mainstream.

Most Americans have never studied visual criticism, art history, or public art. They may have never made art, cast sculpture, or considered the role of public art. Some people even think they hate art and talking about it (“I like art that speaks for itself”). It’s very interesting to see so many Americans having strong opinions about monuments right now.

Monuments are an unlikely lightning rod.

I probably pass a dozen historical statues every week and rarely take notice of them. I take it for granted that they valorize dead white men. They don’t relate to me and they don’t appeal to me; I often find realism and portraiture visually boring. These statues mimic classical Greco-Roman style; they’re elevated on high plinths. This creates hierarchical assertions of power. I’d rather see democratic spaces that are flexible and responsive to local communities and contemporary concerns.

Statues of historical figures mostly convey significance. As didactic tools, their efficacy is limited. They lack the multiplicity of voices and perspectives that makes history compelling and relevant.

For white supremacists and anti-racists/anti-facists/Black Lives Matter activists (activists for racial justice), Confederate monuments are a battleground for a dialogue about race in America. It’s interesting that much larger, and more intangible cultural and political forces—ongoing systemic and institutional racism, of which police brutality has become increasingly visible and publicized due to digital technologies, and Trump’s fear-mongering nostalgia and xenophobia inflaming a base precarious due to neoliberalism and deindustrialization—are manifesting in a dialogue about relatively boring public art.

It is also fascinating how these sculptures have existed for decades, but their meanings have become heightened via political climate, political will, and people’s organizing.

What I learned in art school

It’s easy to ridicule the impracticality of art school. But ideas and skills I learned in art school inform how I understand monuments, which I find especially helpful right now.

Wynton Marsalis played a pivotal role in the removal of the Robert E. Lee statue in New Orleans. Artists can have political power. This is an important example of how artists make change by writing an op-ed and speaking to public officials.

Lucy Lippard’s The Lure of the Local is a fantastic book for thinking about place and place-related art. She actually says that little public art is actually public—much is private because of whose interests it serves. She defines public art as

“accessible art of any species that cares about, challenges, involves, consults the audience for or with whom it is made, respecting the community and environment.”

“a public art exists in the hearts, minds, ideologies, and educations of its audience, as well as in their physical, sensuous experiences.”

She also poses these questions:

Who defines public?
What defines a public space?
What kind of art occupies it best?
How does and can an art in the public realm communicate these ideas about place?
What are the responsibilities of a public artwork to the place, and to those who live there?

We should transform the current Lee Circle into an inviting space that celebrates the communal intentions of the international community that helped us survive Katrina. This place would fill the heart of our city with something uplifting for us all and for all times.

The removal of Confederate statues provides some opportunities to be more creative and generative.

Where should the sculptures go?

What to do with an empty plinth?

I really like the Fourth Plinth in London’s Trafalgar Square. Originally meant to house a sculpture that was never made due to lack of funding, the empty plinth became a city-run platform for rotating public art commissions.

Of these, my favorite is Antony Gormley’s “One and Other.” The empty plinth became a stage for 2,400 UK residents to occupy as they liked, one at a time, for one hour at a time, for 100 days and nights. It’s a breath of fresh air to see living, diverse, wacky, everyday citizens use a place of prestige in a public space. Here’s a great video. 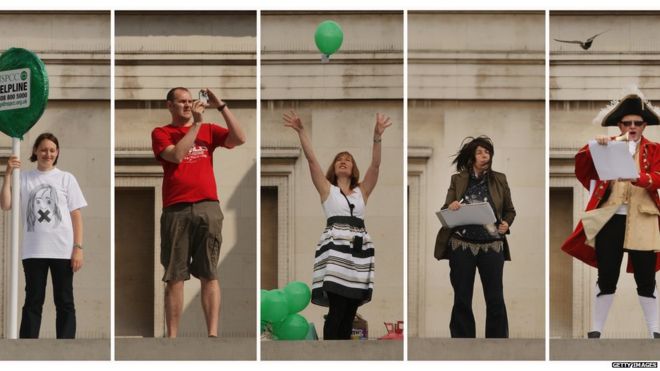 Antony Gormley, One and Other, 2009. Photo: Peter Maciarmid/Getty.

I’m curious about Dispatches from the Archives and The View From Here photography exhibition at SFMOMA. I’m all for exhibitions that help Americans understand China’s pluralism, and the Shanghai exhibition at the Asian Art Museum introduces the cosmopolitan city through its Western-influenced hybridized modern art and design (with a few pieces of contemporary art). Still, I thought the didactic texts shied from the mention of colonialism; this westernization seems possible because cities were forced open to British trade by the Treaty of Nanking after China lost the First Opium War. Also, pop culture afficionados: don’t expect to see lots of vintage-kitsch Shanghai lady adverts; those make up only a small fraction of the exhibition.

Design nerds ho! The immaculate hand-painted stylizations of New Bohemia Signs, San Francisco’s own anachronistic, fedora-donning, sign painting shop, are on view at Adobe Books’ Backroom Gallery through April 3. It’s like Steven Heller’s New Vintage Type came to life in shiny, seductive enamel paint. You can purchase individual functional signs for your indie mart or design tchotchke shelves, or larger aggregations for the aesthetics, and to make an undeniable statement about your good taste.

The signs are really cute. They are examples of great graphic design, but ultimately, just signs. I had hoped to make some smart-sounding statement about semiotics or wayfinding (especially in relation to “The Secret Language of Signs,” Slate’s recent series on signs), but really, style and legibility seem to be the main point of the work. If there is something more interesting to tease out, it’s probably in regards to context: A shop selling books (so antiquated!) exhibiting hand-painted signs produced by another independently-owned, brick-and-mortar small business, and the printed/painted letters they love.

Sort of in the same vein of totally adorable/collectible is Ryohei Tanaka’s show of papercuts at Rowan Morrison Gallery through April 3. Ryohei’s based in Tokyo now; I went to CCA with him in the late 1990s. Back then, he was a total drawing maniac, whose work was characterized by density and a cuteness that was simultaneously attractive and appalling. Now, his explosive prolificness has resulted in figures, monsters and robots in cheery colors and a traditional Asian folk art/paper craft. Small cuts start under $100; if that sinks your battleship you can walk away, as I did, with a navy screenprint of assorted figures on a white cotton rectangle (I think it’s a Japanese work scarf or tea towel) for $8.

The website for Scott Oliver’s Lake Merritt project is up!

“Everybody Have Fun,” Elizabeth Kolbert’s round-up of recent books on the problematic intersection of happiness research and policy in the current New Yorker Magazine (March 22, 2010).