What would happen if you visualize an art competition as a tournament?

Though the tournament model differs from how artists’ submissions are usually juried, it seemed worth experimenting with it for understanding art competition odds.

In Unsolicited Artists’ Advice: Updated Tips from a Juror, I shared this data visualization:

The distribution of points, on a scale from 0 to 17 possible points, of 116 applications.

In this open call, only the top five of 116 submissions were awarded residencies. The points distribution reveals how even submissions that received pretty good scores of 12 or 13 still fell short. It also shows how receiving an average score of 9 or 10 is not even close to being competitive.

Here’s a visualization of a single-elimination tournament with 116 competitors. Every competitor has a chance to become the champion. But the champ will be the only one who wins seven increasingly competitive, head-to-head matches.

A model of single-elimination tournament bracket with 116 competitors. The highlighted area is shown in detail below. // Source: Challonge.com

Detail. Note the two stacked grey bars represent two competitors in a match. The match at the right is a quarter-final.

If this tournament represented the residency call cited above, in order to rank in the top five and receive a residency, a competitor must:

If you think about these two models together, you can imagine that about half of the applicants—including those who received 10 points and under—never made it out of the first elimination round:

Speculative visualization of competitors eliminated in first round.

Then, all but the top five competitors were eliminated in the second, third, or fourth elimination rounds: 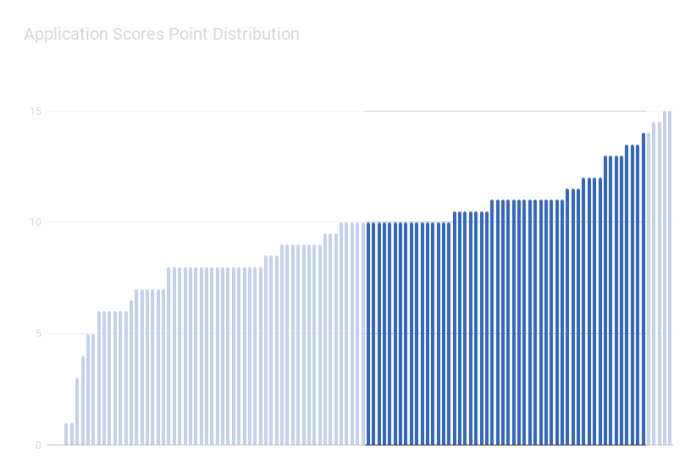 So to visualize it another way, the top five competitors’ advancements through the tournament might look something like this:

Artists’ submissions are practically never judged head-to-head as in an elimination tournament. But perhaps this model is useful as another way for seeing how competitive an applicant must be in order to see rewards.

What makes athletic tournaments so scary is the live performance—fear of failure, embarrassment, and disappointment. At the same time, even losing athletes gain experience that can’t be replicated. Eliminated artists, on the other hand, are cut out of that part of the process. Spared the anxiety of performance, we lose opportunities for evaluation. Artists scoring 3 or 13 points may receive the same rejection letter and generic encouragement to re-apply next year. When a staffer informs the applicant they were a finalist, or shares even a tiny amount of feedback, it is meaningful.

What can artists do? Espouse deliberate practice. Ask for feedback. If you can’t get feedback from juries, ask trusted colleagues to review your application. Make the most of professional development courses.

What can jurors do? Note remarkable artists. Ask for studio visits. Keep them in mind for exhibitions. Invite them to stay in touch.