Flow is an antidote to languishing. Here’s some drawings about flow.
<❤️art community appreciation post> 🙏🏾Thank you Jennifer k Wofford (@woffsilog) for the opportunity to show up and help restore the mural 🎨🖌she created to beautify mom-and-pop restaurants struggling to stay afloat during the pandemic.
What makes you feel ✨alive and present✨?

Some more odds and ends to mull…

In my London art trip, I was intrigued by about two collection-based venues; both in Camden and both new to me. The current shows were interesting enough, but I am more intrigued by the spaces and the ambitious, cutting-edge contemporary art they will show.

David Roberts Art Foundation is “an independent, non-profit foundation” founded in 2007 and seems to aggressively collect and exhibit contemporary art, including the work of younger artists. I really loved the experimental, questioning nature outlined in the exhibition pamphlet:

a museum is a production site, a site that not only presents and describes an existing context, but generates new contexts, a site where artists, curators, critics and other stakeholders can produce, share, discuss, act and interact, where visitors are co-producers, and where the machinery of exhibitions produces prototypes, experiences, catalysts for thought….

I liked this too:

An artwork is a system that cannot be reduced only to an object or an index (certificat, instructions, etc.). It also includes the histories (material and conceptual), the trajectories (physical or virtual) and the narratives (past or to come) generated by the artwork: this is what this programme will research.

Study is not an attempt to capture or seize but a methodology of encounter and the insistence on the provisional as both form and content within the process of research.

Small but stunning Richter on view in A House of Leaves as of two weeks ago; it’s an ever-unfolding exhibition so who knows what’s on now?

While DRAF is housed in an industrial brick warehouse in an alley off of the high street, the Zabludowich Collection is sited in an imposing church in a residential street.

Founded in 1994, the Zabludowich Collection “exhibits in venues in the UK, USA and Finland” and “actively creates new opportunities for audiences to engage with emerging art.”

The current exhibition by Matthew Darbyshire featured sets made of printed vinyl CG streetscapes. I was most interested in the Showhome installation, involving mass manufactured chairs and high-end interior design decorations. It was familiar yet preposterous and sad. There’s something interesting in packaging showrooms’ theatricality in art exhibit’s pretentions of perfect, timeless viewing experiences. The exhibition as a whole expressed some of the suffocation of consumer culture, and I couldn’t help but feel some of that coldness and repression as I left the show.

This detail of The Tempest (~1862) by Peder Balke. It’s a seascape, maybe one of the most unlikely genres of painting I’d be attracted to. But the elegance, brushstrokes,  simplicity and evocativeness is what gets me.

Stephen Chambers’ gold leafed potato print, on view now at the Royal Academy of Arts in the Artist’s Laboratory.

Two faces, carved with simple marks. Maybe a man and a woman. Despite the elemental form, I still read the faces as deeply empathetic with each other, united in the way that lifelong couples are.

Potato prints are a basic form of printmaking, one that could be the first type of printmaking children experience. The idea of gold-leafing a potato print is so absurd it’s brilliant.

A theoretical device for communication. Nice pairing with Demand and Opie. Plus a daringly bright aqua wall. Go Tate! 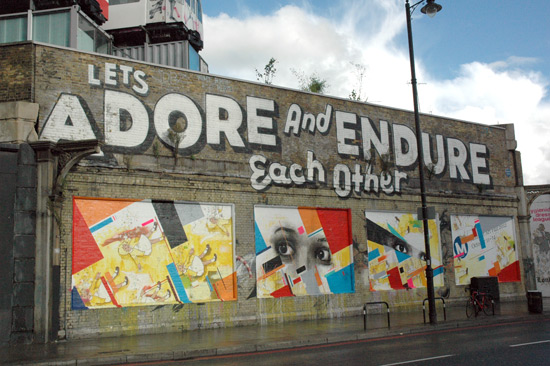 By chance, I stumbled into The Grange Prize exhibition at Canada House.

It was a group exhibition featuring the work of four finalists for a major international, contemporary photo prize. I was most attracted to Jason Evans’ work; it was the most playful and mixed-media, using wall graphics, texts, objects, and loud colors. The combination unfolds in a way that I think asks the viewer to engage the experience in a more multi-sensory way.

Here are some of his casual, snapshot-like photos. I think they work better en masse. 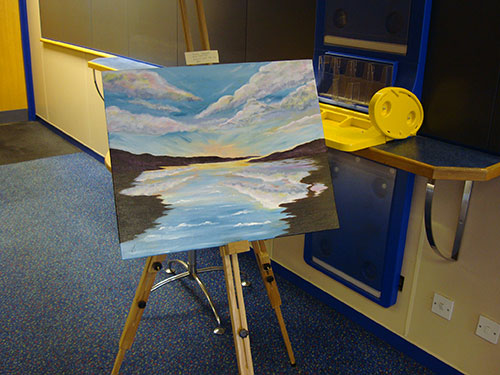 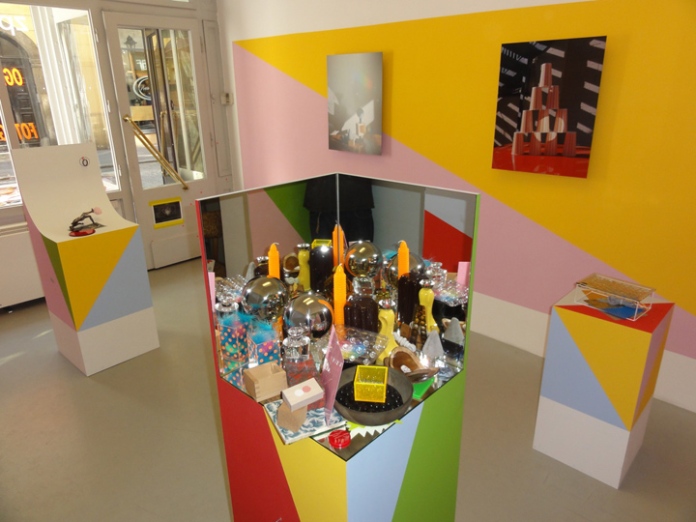 Curiously, I couldn’t bring myself to cast a vote. The show seemed too small; there’s not enough work on view to get a sense of each artist’s scope and capacities. (The winner was announced; her work seems to demonstrate photographic skill the most apparently, but with the least compelling subject matter and use of materials for me personally.)