Tonight, Urbis unveiled State of the Art: New York, an exhibition featuring 16 “emerging”* contemporary artists or artists groups from New York City. The contributions are very high quality, conceptually tight and eminently desirable. With bright lights and flashing colors, the space pulsates with energy. There are videos to watch, installations to circumambulate, and opportunities for interactivity. The show inspired optimistic feelings within minutes… 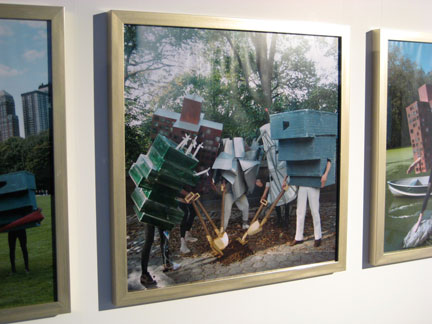 I noticed two themes. First, there seemed to be an attraction to work demonstrating “New York-ness.” Among the site-specific works were The Bruce High Quality Foundation’s The Rite of Spring, a series of photos and a video re-enacting the “Beaux-Arts Ball in 1931, where the giants of Modernist architecture dressed as the landmarks they created.” Think cardboard costumes and tights, like on Broadway or Conan O’Brien. Lovable, but as N.M. might say, “I get it. You’re quirky.” Another only-in-New-York project is a proposal for a thermodynamic stove powered by steam vents in the streets, by Forays (Geraldine Juarez & Adam Bobette). Of course, they cooked a hot dog. Resourceful, yes; palatable, not so much. Plus, I’m not sure that heating up a hot dog counts as “cooking.” Two other projects employ New York cultural phenomena—neighborhood gossips and hip-hop bling—but more on those later. 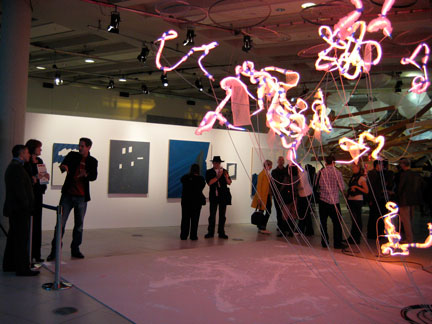 Second, a lot of the work was explicitly post-modernist—directly referencing art and culture of the 20th century. This trend seems like it’s gone from interesting to nearly ubiquitous (and might soon verge on passé). Gandalf Gavan re-interprets Pollack’s drips in neon. He makes gestural concepts like “movement” and “energy” material, in squiggles of light and plaster splashes on the floor. It’s sort of garish and tacky, and flirts a little with corporate lobby light pieces and 1980s new wave decorating motifs. What differentiates Gavan’s work is its precariousness, matter-of-fact presentation of hardware and materials (such as the blue painter’s tape and bubble wrap), and, of course, references to aesthetic discourse. 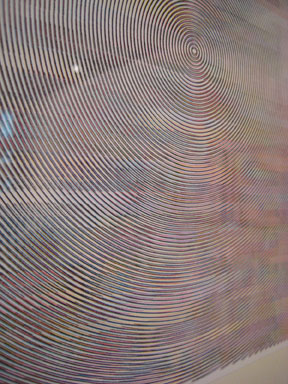 Another work that seemed acutely aware of art history is Joe Winter’s Printershake/Earthquake project. It’s a new spin on action art and chance procedures in image making. He presented five prints (cyan, magenta, yellow, black, full color) and a b/w action photo of someone shaking a consumer-grade printer as it was printing. The display was straightforward, and the prints were surprising. There was also a performance by Matthew Lutz-Kinoy, whose musical, fashion and facial hair styles channeled Freddy Mercury. Why is it that when I see inscrutable performance art, I always feel like people want to re-create Soho in the 1980s? 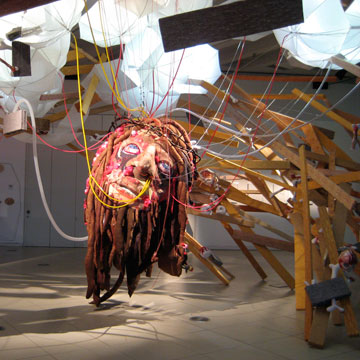 But the show wasn’t limited to these themes. When you first enter the space, your vantage is filled with a massive, spectacular fabric installation. Carolyn Salas & Adam Parker Smith’s Holy Ghost depicts a giant head of Jesus, in all its all guts and glory, in the midst of a tornado of lumber and human bones. It’s all made from fabric—even the firring strips and 2×4”s are covered in wood-grain-printed fabric—making the menacing supernatural weather event seem, conflictingly, cuddly. 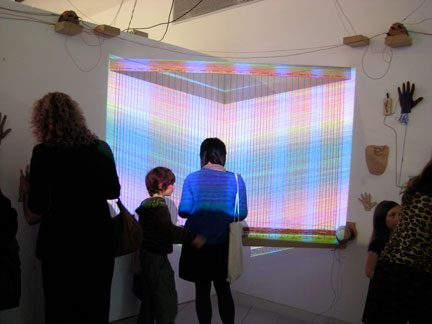 Behind Holy Ghost, a digital projection of colorful static draws in viewers with its flashes and sizzles. It’s the contribution by LoVid (Tali Hinkis & Kyle Lapidus). NetWork is an interactive installation combining weaving and digital technology. By handling some fingerless-glove-like wire apparatus attached to a bird’s nest of electrical leads, participants can influence the colors and patterns of the projections. Visitors can also help weave a screen of electrical wires, to fill the space inhabited by the projection. NetWork makes high-tech low. It’s colorful and friendly, and sweetly reminds me of experimentation in the 1970s, and places like the Exploratorium. On the other hand, I found the interface to be haphazard. The instructions were singed into wood cut-outs that seemed visually, materially and conceptually incongruous. From a design standpoint, a call to action should be as clear as possible. Still, LoVid’s take on the intersection of old and new technologies is smart and pleasing. 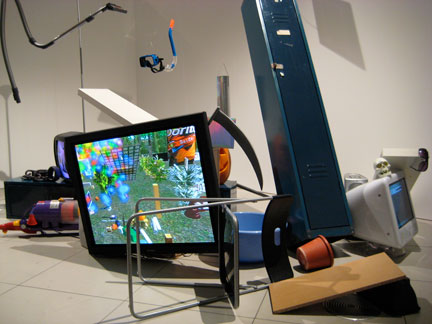 A lot of people think contemporary art looks likes piles of junk, so for that reason alone, I like the pile of junk contributed by eTeam (Hajoe Moderegger & Franziska Lamprecht) in Second Life Dumpster. It’s the contents of a Dumpster in Second Life materialized with “First Life” counterparts. I had hoped the garbage from Second Life would look crappier—maybe covered in poorly rendered texture patterns, perhaps. I think there’s supposed to be a commentary about waste and obsolescence somewhere, but there’s also the irony that the objects were not disposed, but were re-purposed / recycled, at least for the duration of the exhibition. It’s sort of like tinkering with the past, and re-writing the future… 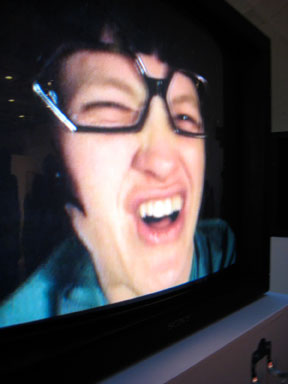 In her videos, Tamy Ben-Tor presents monologues as different archetypal characters (artist, art critic, etc.). My experience with them was one of uncomfortable self-consciousness, especially when she took the role of an artist with a thick Japanese accent and ridiculous glasses. The racial politics are so complicated—it’s a progressive thing, I suppose, that her range of exaggerated characters includes non-whites.

In Bonchinches / The Gossips, vignette videos by Michael Paul Britto, a series of New York women of color talk to, shout at, and mumble about off-screen passersby from a window. The framing (sorry about the pun) device is familiar and comedic, sort of Sesame Street, 227 and countless plays all at once. The actors nail the New Yorker characters spot-on, with fearsome nails, unrepentant bossiness and unveiled verbal aggression. Their loquaciousness is an art form. But I wonder about the reception of this work, and who its audience is. For New Yorkers, they may respond simply with recognition: “Yo, that’s my Tia!” But I wonder if Mancs can understand the accents and slang, and how they interpret the no-holds-barred mannerisms. Do they know that New Yorkers’ bad reputations belie some of the friendliest, nicest people in the world? That there’s more to these women than tough exteriors? 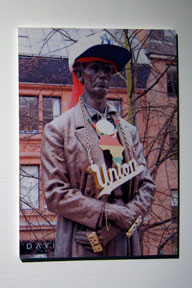 In the intervention True Yank, Leon Reid IV “blings” a statue of Lincoln in Manchester. The little-known history of the statue (having to do with the loss of tens of thousands of mill workers’ jobs due to an embargo on Southern cotton during the American Civil War) is really interesting. In comparison, the art project seems like little more than a prank, an irreverent gesture. In a video statement, the artist cited three motivations behind the work: to bring attention to the sculpture, to spark curiosity about Lincoln, and to “have a laugh.” I had expected more critical thinking—maybe around issues of appropriation, like the appropriation of hip-hop (read: black) style by white chavs? Or “bling” and materialism? Or the human costs of gold mining? Nope, just a non-committal stance behind satire…

*Urbis is pretty loose with this. Some of the artists are in their 40s and have quite extensive, international exhibition histories.