Manchester Museum
The natural history museum is a metonym for Manchester: a bricolage of old and new. There are bright, airy, open galleries brushing up against dim halls lined with cabinets that look like they’re from Darwin’s time. It’s all fitted neatly into a neo-gothic building at the University of Manchester.

During today’s visit, I found the mineralogy department the most fascinating. It’s small — a single room, almost, though a tiny gift shop shares the space. But the specimens are small, so there’s actually lots to see. I must have spent at least an hour looking at rocks today.

The north of Britian is geologically diverse, and the museum featured many spectacular specimens from nearby mines. The range of colors and shapes where dazzling, to the point, where I wondered, as an artist, how could I ever possibly complete with the beauty in Nature? 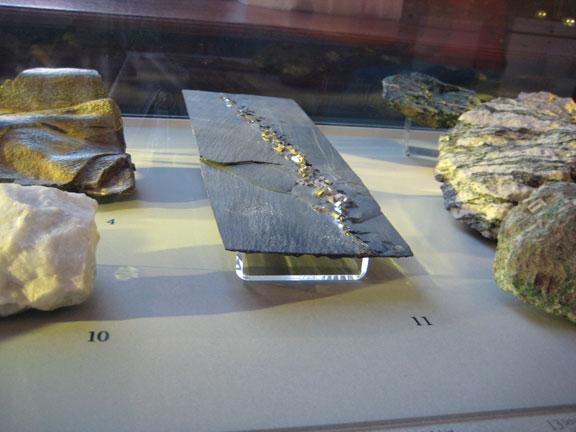 I almost missed one dark cabinet, thinking it was out of order. Then I found a button and pushed. UV lights blinked on, and rocks of all shapes glowed in purples and phantasmagoric grains of green. Awesome. I love the idea of minerals formed by heat, pressure and seismic shifts gaining the property of phosphorescence, even when they are deep in the earth, shielded from light. I find it poetic that in the mining of coal or ore for industry, enigmas were also uncovered.

Subversive Spaces is a large-scale exhibition pairing early 20th century Surrealism with contemporary sculptures, installations and videos by international artists. I’ve had two brief encounters with the show and find that it’s just not my cup of tea. Maybe I’m just not that into Surrealism. Part of this has to do with the fact that Surrealism is often used to introduce viewers to Modern Art, so, for me, it’s taken on a whiff of the palatable, familiar, introductory. Besides, after HBO and David Lynch, the Freudian ideas in early Surrealist paintings and sculptures aren’t very shocking anymore.

That said, I was impressed with Markus Schinwald’s video (watch it on YouTube) featuring two actors — including an immensely capable dancer/movement artist. I think this work epitomizes the show: it’s subversive, surreal and innovative.

The show includes works by major contemporary artists. Among these are two sculptures by Mona Hatoum (a prison-like baby crib in galvanized steel, and an oversized egg slicer), two sculptures by Robert Gober (the foot coming out of a wall, and a perspectival playpen), an installation by Sarah Lucas (a figurative display composed of lights and furniture), and a video by Francis Alÿs (creating music by walking and hitting a fence with a stick).

Gregor Schneider‘s Weisee Folter, a new, site-specific commission that takes up a major gallery, is highly hyped but viewable one visitor at a time. Advance bookings are not taken, and wait times were 90 minutes on an early Tuesday afternoon. So I skipped it, though I suspect that it would register as particularly German—intellectual and dark—like the work of Anselm Kiefer and Martin Kippenberger.

Urbis
Urbis is an ingenious building that’s completely out of character with old Manchester, but it can be forgiven because it adds large, high-quality exhibitions of art and design to the city centre.

Aidan O’Rourke’s Manchester Mega-Photo—basically a giant photographic cityscape—is cool. Even though the commercial district smacks of boosterism, the Mega-Photo is still enjoyable. And anyway, the higher your familiarity with Manchester, the more meaningful the photo becomes.

Reality Hack: Hidden Manchester by Andrew Brooks is a series of fantastic, large light boxes and prints of Manchester’s hidden spaces. These digitally-composed photos are densely-detailed, well-composed, dramatically lit, and completely vertiginous. Nice use of light boxes and prints on silvered paper, which make the photos appear illuminated from within like light boxes, but with the added advantage of non-reflective surfaces.

The photos are visually stunning, though I’ll register two minor qualms, both stemming from questions of taste and commercialism. First, the wall labels: while the didatic texts are well-written and useful, I found the graphic design drew too much attention to itself. They were hard to read (small type, white ink on black ground, rather low on the wall) and cheesy (the exhibition’s identity scheme, a bar code—why?—appeared on all wall labels). Most offensive were the punning titles, like “Abel Tower” (a photo of a bell tower) and “Culvert Report” (a photo of a culvert). Cringe-inducing. So much skill and sophistication in the work, undermined by these useless add-ons. Urbis’ curatorial vision seems like it could use more contemporary art rigor.

While two of the exhibits seem explicitly about Manchester, others are very American.

Black Panther: Emory Douglas and the Art of Revolution
I live in Oakland, and I’ve met Emory Douglas (nice guy). The traveling exhibition is largely educational, employing lots of original source materials, oversized vinyl and wallpaper. Much of the original art is lost, but it was meant for reproduction anyway. It’s curious to be in a multicultural center of England learning about the Black Panther’s radicalism in the U.S. Something about it seems totemic, historicizing, in a way that disconnects the BPP from today’s struggles.

Coming up, Urbis will have a show called State of the Art: New York. Urbis showcases different creative cities in an annual program, but New York!? What is this, 1980? What’s with this obsession with America?

It turns out that some Brits would love for the UK to join the European Union, while others hope that the UK would be more like America. This easy to see in Manchester’s commercial city centre, where nearly all young men are dressed in deliriously colorful post-Kanye gear, while the most popular look for young women includes tights, Uggs, blonde highlights and orange tans. It’s SoCal simulacra under slate Mancunian skies.

Clearly, Manchester is has reinvented itself since the post-Industrial decline and nineties’ IRA bombing into a vibrant city. But its model need not be so sanitized and American, with high-rise condos and Urban Outfitters. Rather than aspire to be Santa Monica today, I’d rather see a new, distinctly English or European vision for tomorrow. Distinctly contemporary English things like The Cooperative: a co-op that actually provides services like quality groceries and banking. Preserving the pubs alongside the hip lounges. And walking the green walk: have a recycling program, for starters. Green the city and its canals. Create other safe, viable public spaces besides the mall.