LA/SF art/arch pt 3. 📐Thinking about spaciousness 🧘🏻‍♀️, visualized with the Schindler House run by @makcenter in West Hollywood. One of the earliest examples of Modernist architecture, it was built in 1922 by Rudolf Schindler who borrowed heavily from Japanese and indigenous nations in the Southwest, experimenting with concrete, and articulating tropes of California architecture and indoor/outdoor living spaces.
😊🍎🍇📚🪡🏳🙃
Fundraiser🚨for 🙅‍♀️bodily autonomy/✊🏾antiracism/🏳️‍⚧️trans rights/🚫anti-gun violence causes. 👀HOW THIS IS GONNA GO: I’ll offer up this original drawing/collage for auction. You bid in the comments below. I’ll call it Wednesday at noon. 🏁Winner chooses one of the causes above, transfers the funds, I pick the org and all profits (after shipping; local delivery is possible in SF/Alameda counties) go to the org.

Four days.
Five museums.
Thirty-five galleries.
I saw innovative, fresh exhibitions in museums, and only a few ambitious shows in galleries. Many galleries were closed for the holidays, though a few have folded since my last visit a year ago (too bad, I really liked Anna Helwing’s gallery).

Click on the image below for a larger view. It’s a big file, give it a sec. 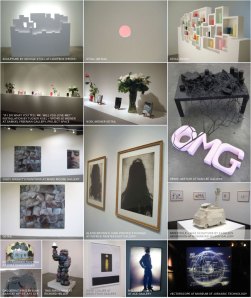 1.
California Biennial
Orange County Museum of Art
A fantastic show that counterbalances a surprisingly pointed emphasis on war and borders with utopic, phenomenological experiments. Curator Lauri Firstenberg pulled off a multi-site show featuring many excellent artists of color and women. I saw the museum show, the site of work by only about 30 of 50+ artists. I really enjoyed the work of Erica Vogt, whose small-scale projector-based installations were intimate reflections on media as framing devices. Mike Arcega‘s installation of two-by-fours looked great, and worked well sited near the port of Long Beach, as did Jebediah Ceasar’s 4x4x8’ polyurethane block. Anna Sew Hoy‘s site-specific sculptures for a dance performance were Isamu Noguchi-esque and a little cuddly. Justin Beal presented an intriguing installation of objects, furniture and wall-based works at the intersection of industrial production and war profiteering. Daniel Joseph Martinez‘ installation with an animatronic human figure was cold and discomfiting, effectively conjuring (for me) our complicity in acts of torture. Jordan Kantor and Mark Hagan both present satisfyingly odd, brainy paintings. (If commercial galleries only exhibited drawings and paintings as thought-provoking as Hagan’s and Kantor’s, gallery goers would be spared so much mediocre art!) Edgar Arceneaux‘s installation of shiny things, broken mirrors and haphazard projectors looked like a set for a Pink Floyd video, while his video reminded me of Politics of Rehearsal, Francis Alÿs’ show at the Hammer Museum. Arceneaux’s search for meaning seems highly provisional, reflecting the times’ uncertainty. In the same vein, I found Amanda Ross-Ho‘s excised studio walls — assemblages of found objects upon found marks — a little too totemic for my tastes, but I could appreciate the inward-looking search for authenticity, especially as institutions are crashing down all around us.

2.
Other People: Portraits from Grunwald and Hammer Collections
Oranges and Sardines
Gouge: The Modern Woodcut 1870 to Now
Armand Hammer Museum
I like the Hammer a lot. My current investigations don’t overlap with any of these shows’ themes — woodcuts, new abstract painting, and portraits — so it’s a testament to the institution that I found all of these shows elucidating, richly textured and curatorially interesting.
Other People mixed contemporary and historical portraits. It was a treat to see 400-year-old engravings by Dürer next to narrative photographs by Wolfgang Tillmans and Catherine Opie. I also really liked Mike Mandell‘s baseball trading cards featuring photographers. The photos are dorky and fun, and a little bit cringe-worthy like Mike Smith’s photos.
In Oranges and Sardines, six contemporary abstract painters selected art to hang alongside one of their own works. I’m not crazy about Wade Guyton’s inkjet prints on canvas, but his selections — which included a light by Dan Flavin, a stage for a go-go dancer by Felix Gonzalez-Torres, and a photograph of a hammer, sickle and slice of pizza by Andy Warhol — were sensational and funny, and they inspired a new look at his work. Oranges and Sardines is a great chance to see painters’ points of references firsthand.
I’m familiar with woodcuts, but I still enjoyed many surprises in Gouge. Indian prints from the late 1800s were endearingly stylized; they seemed to be evidence of early modernism’s appropriation of non-Western visual languages. I was amazed by a detail of Thomas Kilpper’s ambitious project, “The Ring,” a woodcut made from a 4,000 square foot parquet floor. I also found Christine Baumgartner’s engraving-style woodcuts based on video surveillance satisfying in its visual and conceptual integration. And Edvard Munch’ timeless variations on the Kiss (see image) were moving as always.

3.
Anne Collier
Marc Foxx Gallery
Really nice photos about photography / framing framed things like albums, prints, works of art. It’s a tight grouping of images that compels the viewer to construct a narrative from these disparate, but beautifully made and installed, images.

4.
Violent Times
Melanie Pullen
Ace Gallery
Ninety-five massive prints and lightboxes feature models dressed as soldiers in action. The show is a sexy indictment of the valorization of youth, masculinity and war.

5.
Ambitious programming, like Rain Field by Jake Lee-High at Fringe Exhibitions, and Nail to Nail by Darren Almond at David Patton Projects
Honestly, I’m most impressed by the scale and ambition of these works. Lee-High presents a 117-channel audio and weather installation in nearly complete darkness. Almond presents a beautifully-shot, comment-free documentary-style video of a worker mining sulphur in Indonesia. The work is interesting and good, but considering that most galleries of this size are content with simply putting pictures on the walls, I especially admire the galleries for committing to this risk-taking art.

The Grapevine was closed due to a severe storm, forcing us to take a lengthy detour to Highway 101. The drive takes twice as long as it should have.

A disgustingly artificial tea. I asked for an unsweetened chai and receive a drink loaded with “No Sugar Added®” sweetener. The English language is being supplanted by branded corporate-speak.